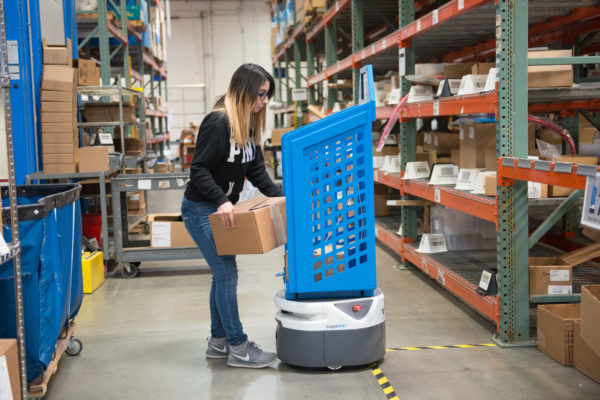 AI is buzzing with the potential to dominate functionality across all aspects of the business ecosystem – and broader society – but one of the key areas of industry most likely to see a big change soon is within supply chains. Market-research firm IDC predicts that by 2020, 50% of mature supply chains will use AI and advanced analytics. AI programs and robotics don’t get tired, or bored, and make mistakes, and they can be used for everything from menial, repetitive jobs to complex planning within the supply chain. They are no longer some far-off future fantasy either. In some supply chains they’ve already arrived and are fast becoming an integral to operations. And they are about to disrupt the industry as we know it.

Here are some areas where AI are already beginning to be used in the supply chain, and will start to dominate over the next few years:

On the Warehouse Floor

It’s a story that we’ve been hearing since the industrial revolution: human workers replaced by advanced machines that can do their work much better, faster and with more reliability. The introduction of AI into the supply chain may be the biggest step yet towards potentially removing human workers from the warehouse altogether. Gartner predicts that by 2021, one in 10 warehouse workers in established economies will be replaced by autonomous mobile robots. AI will be able to perform the menial and repetitive tasks that working in a warehouse demands with more efficiency and accuracy than a human worker currently can.

Warehousing Logistics International anticipate that the operations with the highest likelihood of automation are predictable physical activities (81%). As has historically been the case with the introduction of new tech, it’s inevitable that the physical jobs are the first to be at risk as AI powered mechanisms will be able to perform these tasks without getting tired or bored. It also removes the margin of human error and reduces the risk that human employees will cause accidents for themselves or others whilst handling heavy machinery. Robot warehouse workers are already on the scene as Amazon’s Kiva robots were introduced in 2014 and have managed to work much more rapidly than their human counterparts whilst only requiring 5 minutes to charge every hour. It’s simply more efficient and cost-effective to use automation for physical labor.

Delivery robots have been enjoying the spotlight of late and over the coming years we will no doubt see them revolutionizing last mile deliveries. The first official drone delivery took place in November 2016, when Domino’s used a Flirtey drone to deliver pizza to a customer in Whangaparaoa, New Zealand (the very first robot delivery was a Peri-Peri chicken pizza and a chicken & cranberry pizza, by the way).

Federal Aviation Administration regulations and concern over public safety mean that drone deliveries have been put on the back burner for now, but land-based robot delivery systems powered by AI software have shown real promise. On March 23, 2017, bots from Starship Technologies began to take over some of the work done by human couriers at the on-demand delivery startup DoorDash. The self-driving robots transport food from restaurants in Redwood City, California, to customers within a two-mile radius. Many organizations are now investing huge amounts of money into the development of robot delivery systems in an attempt to save costs in the long run. And the early projections add up, as a 2015 study by ARK Investing Group predicted that drone delivery would cost Amazon less than $1 per shipment, while Business Insider estimated that they currently spend approximately $5.75 on shipping per package. Expect to see a lot of these little guys rolling around soon.