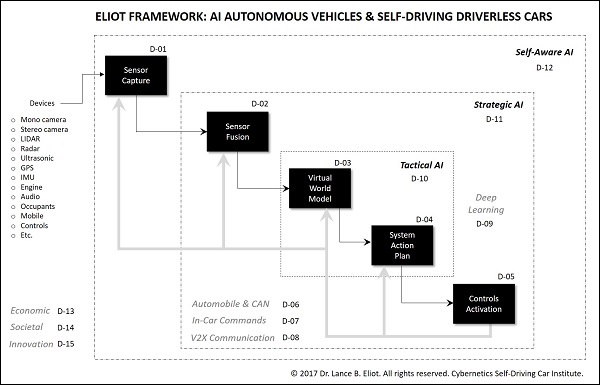 When I give presentations about self-driving cars and teach classes on the topic, I have found it helpful to provide a framework around which the various key elements of self-driving cars can be understood and organized. The framework needs to be simple enough to convey the overarching elements, but at the same time not so simple that it belies the true complexity of self-driving cars. As such, I am going to describe the framework here and try to offer in a thousand words (or more!) what the framework diagram itself intends to portray.

I will describe each of the elements, one at a time. After doing so, I’ll discuss aspects that illustrate how the elements interact and perform during the overall effort of a self-driving car.

At the Cybernetic Self-Driving Car Institute, we use the framework to keep track of what we are working on, and how we are developing software that fills in what is needed to achieve Level 5 self-driving cars.

On the framework, the box labeled as D-01 indicates “Sensor Capture” and refers to the processes of the self-driving car that involve collecting data from the myriad of sensors that are used for a self-driving car. The types of devices typically involved are listed, such as the use of mono cameras, stereo cameras, LIDAR devices, radar systems, ultrasonic devices, GPS, IMU, and so on.

These devices are tasked with obtaining data about the status of the self-driving car and the world around it. Some of the devices are continually providing updates, while others of the devices await an indication by the self-driving car that the device is supposed to collect data. The data might be first transformed in some fashion by the device itself, or it might instead be fed directly into the sensor capture as raw data. At that point, it might be up to the sensor capture processes to do transformations on the data.  This all varies depending upon the nature of the devices being used and how the devices were designed and developed.

Imagine that your eyeballs receive visual images, your nose receives odors, your ears receive sounds, and in essence each of your distinct sensory devices is getting some form of input. The input befits the nature of the device. Likewise, for a self-driving car, the cameras provide visual images, the radar returns radar reflections, and so on. Each device provides the data as befits what the device does.

Sensor fusion is a tough task. There are some devices that might not be working at the time of the sensor capture. Or, there might some devices that are unable to report well what they have detected. Again, using a human analogy, suppose you are in a dark room and so your eyes cannot see much. At that point, you might need to rely more so on your ears and what you hear.  The same is true for a self-driving car. If the cameras are obscured due to snow and sleet, it might be that the radar can provide a greater indication of what the external conditions consist of.

For humans, we presumably keep in our minds a model of the world around us when we are driving a car. In your mind, you know that the car is going at say 60 miles per hour and that you are on a freeway. You have a model in your mind that your car is surrounded by other cars, and that there are lanes to the freeway. Your model is not only based on what you can see, hear, etc., but also what you know about the nature of the world. You know that at any moment that car ahead of you can smash on its brakes, or the car behind you can ram into your car, or that the truck in the next lane might swerve into your lane.

The AI of the self-driving car needs to have a virtual world model, which it then keeps updated with whatever it is receiving from the sensor fusion, which received its input from the sensor capture and the sensory devices.

One question arises as to whether or not the controls respond as they are commanded to do. In other words, suppose the AI has commanded the accelerator to increase, but for some reason it does not do so. Or, maybe it tries to do so, but the speed of the car does not increase.  The controls activation feeds back into the virtual world model, and simultaneously the virtual world model is getting updated from the sensors, the sensor capture, and the sensor fusion. This allows the AI to ascertain what has taken place as a result of the controls being commanded to take some kind of action.

By the way, please keep in mind that though the diagram seems to have a linear progression to it, the reality is that these are all aspects of the self-driving car that are happening in parallel and simultaneously. The sensors are capturing data, meanwhile the sensor fusion is taking place, meanwhile the virtual model is being updated, meanwhile the system action plan is being formulated and reformulated, meanwhile the controls are being activated.

They are shown diagrammatically in a simplistic manner to help comprehend what is taking place. You though should also realize that they are working in parallel and simultaneous with each other.  This is a tough aspect in that the inter-element communications involve latency and other aspects that must be taken into account. There can be delays in one element updating and then sharing its latest status with other elements.

Contemporary cars use various automotive electronics and a Controller Area Network (CAN) to serve as the components that underlie the driving aspects of a car. There are Electronic Control Units (ECU’s) which control subsystems of the car, such as the engine, the brakes, the doors, the windows, and so on.

The variety of ways in which a self-driving car will be communicating with other cars and infrastructure is being called V2X, whereby the letter X means whatever else we identify as something that a car should or would want to communicate with. The V2X communications will be taking place simultaneous with everything else on the diagram, and those other elements will need to incorporate whatever it gleans from those V2X communications.

Currently, the use of artificial neural networks is the most prevalent form of deep learning. Based on large swaths of data, the neural networks attempt to “learn” from the data and therefore direct the efforts of the self-driving car accordingly.

Tactical AI is the element of dealing with the moment-to-moment driving of the self-driving car. Is the self-driving car staying in its lane of the freeway? Is the car responding appropriately to the controls commands? Are the sensory devices working?

For human drivers, the tactical equivalent can be seen when you watch a novice driver such as a teenager that is first driving. They are focused on the mechanics of the driving task, keeping their eye on the road while also trying to properly control the car.

Very few of the self-driving cars being developed are including a Self-Aware AI element, which we at the Cybernetic Self-Driving Car Institute believe is crucial to Level 5 self-driving cars.

The Self-Aware AI element is intended to watch over itself, in the sense that the AI is making sure that the AI is working as intended.  Suppose you had a human driving a car, and they were starting to drive erratically. Hopefully, their own self-awareness would make them realize they themselves are driving poorly, such as perhaps starting to fall asleep after having been driving for hours on end. If you had a passenger in the car, they might be able to alert the driver if the driver is starting to do something amiss. This is exactly what the Self-Aware AI element tries to do, it becomes the overseer of the AI, and tries to detect when the AI has become faulty or confused, and then find ways to overcome the issue.

We need to keep in mind the societal aspects will underlie the AI of the self-driving car. Whether we are aware of it explicitly or not, the AI will have embedded into it various societal assumptions.

I included the notion of innovation into the framework because we can anticipate that whatever a self-driving car consists of, it will continue to be innovated over time. The self-driving cars coming out in the next several years will undoubtedly be different and less innovative than the versions that come out in ten years hence, and so on.

For those of you that want to learn about self-driving cars, you can potentially pick a particular element and become specialized in that aspect. Some engineers are focusing on the sensory devices. Some engineers focus on the controls activation.  And so on. There are specialties in each of the elements.

Researchers are likewise specializing in various aspects. For example, there are researchers that are using Deep Learning to see how best it can be used for sensor fusion. There are other researchers that are using Deep Learning to derive good System Action Plans.  Some are studying how to develop AI for the Strategic aspects of the driving task, while others are focused on the Tactical aspects.

A well-prepared all-around software developer that is involved in self-driving cars should be familiar with all of the elements, at least to the degree that they know what each element does. This is important since whatever piece of the pie that the software developer works on, they need to be knowledgeable about what the other elements are doing.

The Fast-Tracking Approach To AI Ethics Is Unwise For AI Autonomous...