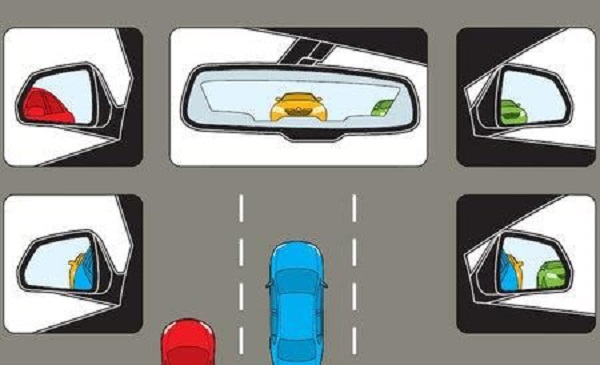 In college, my roommate was a car buff. He loved cars. Whenever he had the time, he would tinker with some aspect of his beloved car. At first, I thought he knew everything thing there was to know about cars. He did though have some quirks, one of which I discovered during a first-time ride with him in his pampered car. I had noticed while sitting in the passenger seat that he rarely seemed to look at his rear-view mirror. Upon closer inspection, I realized that there wasn’t a mirror in his rear-view mirror.

His answer: There’s no reason for him to look behind himself.

Note that he “cleverly” and purposely had not removed the rear-view mirror mount itself due to it legally being required by the Department of Motor Vehicles (DMV) that he had to have one. He didn’t want to get a ticket from a cop and so he figured no one would ever know that he didn’t have the actual mirror in the rear-view mirror.  Thus, he had a rear-view mirror that he never needed to glance at and it was there solely for ornamental purposes to avoid getting fined.  I pointed out that I was pretty sure that if a cop realized there wasn’t a mirror he would still get a ticket, in spite of having the mount. He said that the odds of a cop realizing that there wasn’t a mirror was slim, and if a cop did realize it, the issued ticket would only be a fix-it ticket that would be easy to rectify. Seemed amazing to me that he had put so much effort into this, when he could have just left the darned mirror in the thing.

This kind of boggles the mind and is pretty wild. A driver that does not believe he or she needs to look behind themselves. No need to see the traffic behind them. Just drive forward and anything behind you will need to take care of itself. Life is apparently forward looking, not backward looking.

Where else do we see this kind of logic? In some of today’s self-driving cars.

You might be saying to yourself that most cars already now have a back-up cam, and indeed it is gradually becoming a mandated feature on American cars, thus they can “see” behind themselves. A back-up cam though is just used for backing up, when you are moving relatively slowly, and in reverse. It is not used when you are moving forward. Tesla’s have a radar unit on the front grill of the car, but no radar at the back of the car. They have cameras pointing at the back on the Model 3, but no other sensory devices for this purpose.

Why would you care about what’s behind your car?

Well, imagine that you are sitting at an intersection due to a red light and a car coming up behind you is coming at you very quickly. Your judgement tells you that the wayward car is going to ram into the rear of your car. You quickly move out of the way to avoid getting crashed into. This happened to me a few months ago. I did a risky safety maneuver by going into the intersection (luckily it was open) to avoid the careless car that was coming upon me – presumably the driver and had not realized that the light was red. Had I not moved out of the way, it would have been smash city. If I hadn’t been looking at my rear-view mirror, I would not have known to move out of the way.

For most starting drivers such as teenagers, they are instructed to always be checking their rear-view mirror. Glance at it frequently. Know what cars are behind you. Know how fast they are moving. Know if they are directly behind you, or whether they are in a different lane. Be aware of your surroundings. Be watching for motorcyclists that are coming up behind you. Indeed, during my morning commute on the freeway, I often see cars ahead of me that have realized a motorcycle is coming up upon them, and it is weaving throughout traffic as it cuts on the lane lines. Those observant drivers that are watching their rear-view mirror move over slightly from the lane line to give the motorcyclist a little added space to pass.  It is a courtesy and also a means to reduce the chances that the motorcyclist will hit their car.

Most of the motorcyclist accidents that I witness on the freeway are typically due to a car driver that did not realize the motorcycle was coming up behind them. Whether the human driver was lazy or just being forgetful, they made a lane change and plowed right into a motorcyclist. Believe it or not, this happens about once per week during my five days a week freeway commute. Over and over again, I see a car make a lane change and a motorcyclist that gets caught going forward and ramming into the lane switching car. Did the driver of the car look in their rear-view mirror to see what was behind them? Probably not.

This is what we’re going to also experience with many self-driving cars, until the self-driving car makers get more in-tune with considering what goes on behind a car. Self-driving cars equipped with LIDAR (see my column on LIDAR) are fortunately able to “see” behind the car. By using laser pulses, the LIDAR can potentially identify objects behind the car. I say the word potentially because this assumes that the LIDAR is being used for a 360-degree perspective around the car. Some LIDAR have a narrower Field of Vision (FOV) and do not encompass a full 360-degree viewpoint.  Even the ones that do have a 360-degree FOV are often programmed to not be especially mindful of what is behind the car.

Let me explain this a bit further in terms of what is technically going on (see too my article about sensor fusion for self-driving cars). The LIDAR that is able to collect a 360-degree view is simply gathering data. It is up to whatever AI component is doing sensor fusion to figure out what the data actually means. If the AI system is programmed to not utilize the data from the LIDAR that shows what is happening behind the car, it makes little difference that the LIDAR is collecting it at all.  This is equivalent to having a teenage driver that looks in their rear-view mirror, sees what is going on behind their car, but is unable to mentally process this visualization and just proceeds to drive as though they really hadn’t looked at the rear-view mirror at all.

Why wouldn’t an AI system make sure to squeeze every ounce of data from the LIDAR? It could be that the developers didn’t realize that using rearward data would be important. They might have thought the same thing that my college roommate believed, namely that having data from behind you isn’t particularly important. Or, they might have been rushed to develop the AI for the self-driving car and didn’t have the time or resources to develop code to analyze rearward data. One might also consider that processing the rearward data takes processing power and so you need to have more processors on the self-driving car to do this kind of calculating. It can be a cost factor of having more processors and so therefore it increases the cost of the self-driving car. Another possibility is that the rearward data is only analyzed for the most obvious of deadly circumstances, but otherwise the data is ignored.

This belies the fact that every day we have thousands of rear-end accidents taking place. The rearward data should be used to make predictions about what might happen. Each day, during my morning commute, I am mentally calculating whether a car rushing up behind me will potentially ram into my car. If I think the risk factor is high enough, I take evasive action. We should expect that our self-driving cars should use the same logic (see my article about defensive driving for self-driving cars).

Self-driving cars should be collecting rearward data, they should be merging it within the virtual model of their surroundings, and they need to ascertain probabilities of potential dangers and how to drive defensively because of the dangers. Elon Musk has said that he doesn’t believe that LIDAR is needed for self-driving cars. In which case, if you believe as I do that knowing what’s behind you is essential for a true self-driving car, he’s betting that cameras alone are sufficient for rearward inspection. Cameras have numerous limitations and so having just one kind of sensory device for rearward data collection is dicey.

Besides detecting cars that are approaching you, it is also important to keep track of pedestrians that are behind you. When I was driving down an alley last year, and though I was moving very slowly, a pedestrian walked right up behind my car and walked right into it. I admit that I had not seen him, even though I was glancing at my rear-view mirror from time-to-time. I heard a thump on the trunk of my car, and imagine my shock to look back and see that a human was bent over on the trunk of my car. I even thought at first that it was a scam. Maybe the person wanted to claim an accident had happened and get me to pay them off or maybe file an insurance claim.

Due to economic reasons, self-driving car makers are tending to have just one form of sensor technology for looking rearward. Each type of sensor has its own limitations. Combining the perspective of multiple sensors is key for driving safety. To me, a true self-driving car ought to have LIDAR, cameras, and radar for rearward data collection. If we want to ultimately achieve a Level 5 self-driving car (see my article about the Richter scale of self-driving cars), I suggest we will need multiple types of sensors and a more rigorous effort of AI software that can stitch together the data and take appropriate actions.  Watch out for what’s behind you!