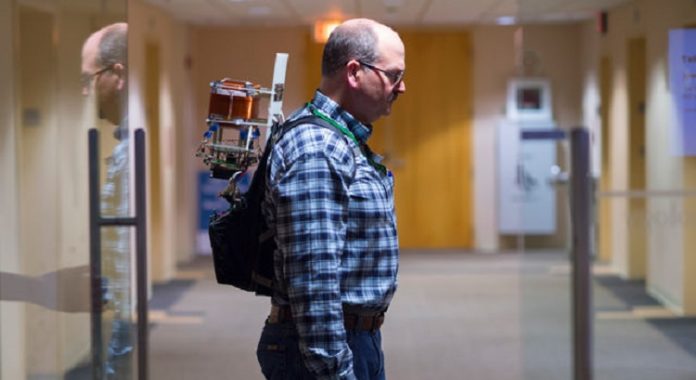 In 1999, six career firefighters lost their lives responding to a five-alarm fire. They were part of a group of 73 dispatched to a smoke-filled warehouse in Worcester, Massachusetts. Lost inside the building’s tight corners, they were unable to find an exit before running out of oxygen.

Avoiding a tragedy like that has been a technical challenge for decades. In the outdoors, firefighters can use GPS to track one another, and radios to stay in communication. But when they move into a steel and concrete building, these technologies suddenly become unreliable.

A research team at NASA’s Jet Propulsion Laboratory in Pasadena, California, has developed a tracking system that could be a game-changer for firefighter safety. The team has been demonstrating the system, called POINTER (Precision Outdoor and Indoor Navigation and Tracking for Emergency Responders), for national and regional leaders in the first-responder community. The tracking technology could also benefit search-and-rescue teams in industrial or military contexts.

In August, POINTER was successfully demonstrated for top leadership at the Department of Homeland Security (DHS) Science and Technology Directorate, which has funded its development.

“To this day, the ability to track and locate first responders is a number one priority for disaster agencies across the country,” said Greg Price, DHS First Responder Technologies Division director. “It’s truly a Holy Grail capability that doesn’t exist today. If the POINTER project continues along its current path of success, first responders will be safer in the future.”

In September, representatives from fire departments across the U.S. visited JPL for a demonstration of POINTER. The tracking challenge was top of mind for Andrew Wordin, a battalion chief with the Los Angeles Fire Department: just weeks before, a firefighter became lost in a building after a roof gave way under him.