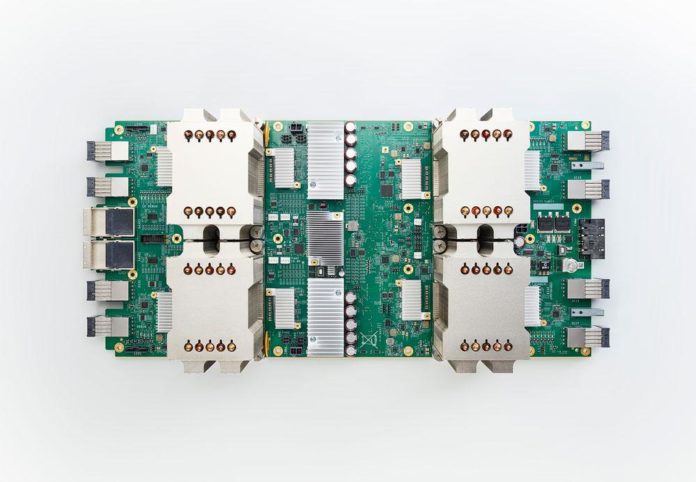 A year ago, Google revealed the custom chip that it built in secret to accelerate machine learning tasks in its data centers. On Wednesday, the company unveiled a second generation of the chip, which is capable of not only running software but also training it.

The next generation of the tensor processing unit – more commonly known as the TPU – is the latest sign that internet companies are growing impatient with slowing improvements in computer chips for machine learning, which involves training programs on reams of data and then applying the lessons to new information.

Google’s first chip was only capable of make judgments with what it had already learned. But the newest TPU can also run the vastly complex algorithms used in training, a vital part of the process that involves leafing through hundreds of thousands of images or search terms, learning the difference between them without explicit programming.

The announcement suggests a shallow but deepening wrinkle in the semiconductor industry, which has struggled with the end of Moore’s Law and slowing improvements in computer hardware. Last year, Google said that its chips were around three processor generations (or around seven years) ahead of the next most advanced chips.

At the same time, chip suppliers are pouring billions of dollars to stay ahead of the machine learning demands of cloud companies like Google and Microsoft, which has also devised custom chips for data centers. Google’s latest chip is a potential threat to Nvidia, which claims that its graphics chips are significantly faster than TPUs at training and inferencing tasks.

Last week, Nvidia revealed that it had spent $3 billion on its latest accelerator chip, which contains specialized “tensor cores” to perform 120 trillion operations per second for deep learning. Inside the silicon slab are more than five thousand processor cores and 20 billion transistors to divide and conquer sophisticated software.