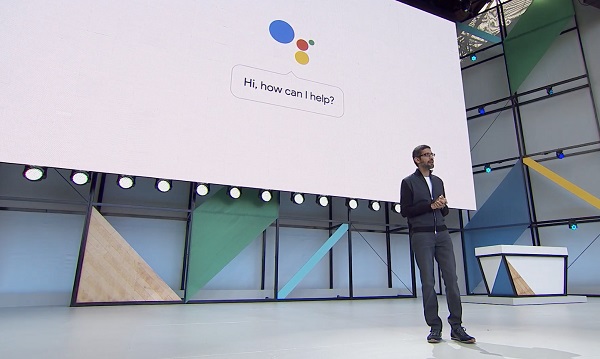 But to better illustrate those metrics and potential growth areas for the company, Google CEO Sundar Pichai and Alphabet and Google CFO Ruth Porat sprinkled in some more tangible numbers about the company’s progress over the last quarter of 2017 and the year overall.

The figures they shared reveal where the company is headed and how its investments in its “three biggest bets,” — hardware, cloud and YouTube — have manifested themselves.

Google has sold “tens of millions” of Google devices for the home over the past year, including the Google Home, Mini, Max and Chromecast.

“Our AI research and innovation leads the world,” Pichai said during Thursday’s earnings call. “Our mission to better organize the world’s information has been transformed by these technologies, with our search products and the Google Assistant at the heart.”

Pichai also noted that “There was a lot of excitement around the Google Assistant at CES from partners and consumers.” (That was thanks in part to the company’s aggressive advertising efforts in Las Vegas.)

2. People rang in the new year with 3 billion Google Photos.
“One area that’s really benefiting from our advancements in AI is photography,” Pichai said during Thursday’s call.

He noted that the Pixel 2 phone employs machine learning and video stabilization to up the ante on smartphone video standards.

He also shared a crazy stat about Google Photos: More than 3 billion photos and videos were uploaded to Google Photos on New Year’s Eve alone.

3. Google Cloud brings in $1 billion per quarter.
“Google Cloud, which includes Google Cloud platform and G suite, has reached meaningful scale,” Pichai said. “And I’m excited to share today that it’s already a billion-dollar-per-quarter business. In fact, we believe that Google Cloud platform, based on publicly reported data for the 12 months ending December 2017, is the fastest-growing major public cloud provider in the world.”

What Salesforce Einstein teaches us about enterprise AI