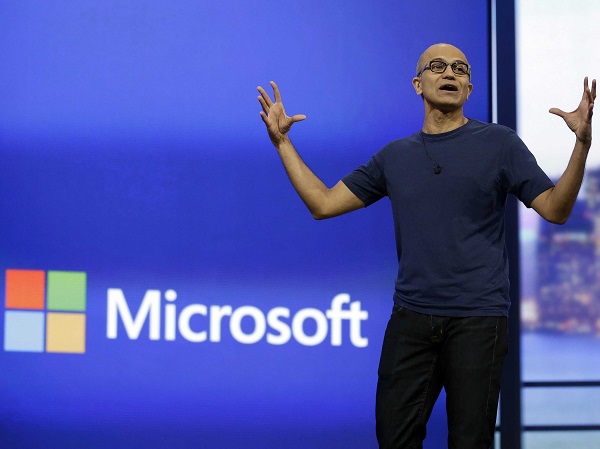 Microsoft has named artificial intelligence as one of its top priorities in a financial filing.

The annual report for the company’s 2017 fiscal year, which ended on June 30, now includes six references to AI, up from zero in the previous annual report.

And the company has plunked AI into its corporate vision statement, too.

“Our strategic vision is to compete and grow by building best-in-class platforms and productivity services for an intelligent cloud and an intelligent edge infused with AI,” the company wrote in the annual report, which was released on Wednesday.

For the sake of comparison, here’s last year’s version: “Our strategic vision is to compete and grow as a productivity and platform company for the mobile-first and cloud-first world.”

For Microsoft watchers, that old tagline should sound very familiar — pretty much ever since he became CEO of Microsoft in 2014, Satya Nadella (shown above) has repeatedly spoken of the “mobile-first and cloud-first world” that the company was trying to target.

Mobile is gone — not a surprise, given the company’s struggles with its Windows Phone operating system and its acquisition of Nokia, which Microsoft essentially declared worthless when it wrote down the total value of that acquisition in 2015.

Cloud computing, including fast-growing products like Office 365 and the Azure public cloud are still there. Now AI is there with it, too.

Microsoft has acquired a few AI startups, like Maluuba and Swiftkey, since Nadella took over, and has established a formal AI and Research group. That team “focuses on our AI development and other forward-looking research and development efforts spanning infrastructure, services, applications, and search,” the annual report says.

Microsoft’s vision reset comes after Sundar Pichai, CEO of Alphabet’s Google, began saying that the world is shifting from being mobile-first to AI-first. Facebook has also invested in both long-term AI research and AI product enhancements alongside Microsoft and Alphabet.

Read the source article at cnbc.com.