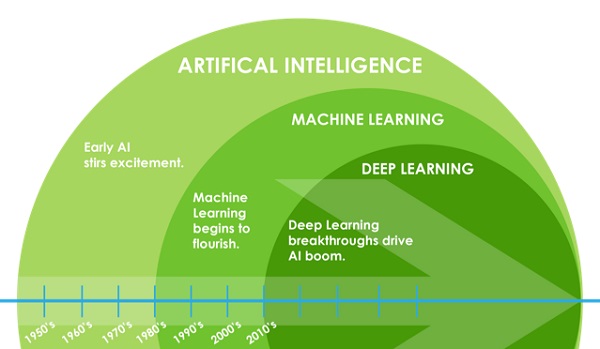 Most IT leaders have heard of deep learning, but few really understand how this new technology works.

Deep learning burst onto the public consciousness in 2016 when Google’s AlphaGo software, which was based on deep learning, beat the human world champion at the board game Go. Since then, deep learning has begun appearing in news reports and product literature with more frequency, but few organizations are actually using it today.

The 2018 O’Reilly survey report How Companies Are Putting AI to Work Through Deep Learning found that only 28% of the more than 3,300 respondents were currently using deep learning. However, 92% believed that deep learning would play a role in their future projects, with 54% saying it would play a large or essential role in those initiatives.

As companies plan to move ahead with those projects, the number one challenge holding them back is a lack of skilled people. The report noted, “Leaders in AI have long talked about the need to make deep learning accessible to developers without a Ph.D. That’s essential to progress; AI must become accessible to domain experts in other disciplines.”

The following slideshow doesn’t even scratch the surface of what it takes to become an expert in deep learning. But it does provide a high-level overview of the topic and covers the basics that CIOs, IT managers, and business leaders need to understand about this emerging technology.

1. Deep learning is a subset of machine learning.

AI (and cognitive computing) is a broad category that involves teaching computers to think the way people think.

Machine learning is the subcategory of AI that involves teaching computers to get better at various tasks without being explicitly programmed; essentially, it enables computers to improve their performance without humans telling them what to do.

Deep learning is a specialized type of machine learning that uses a hierarchical approach. It’s a set of algorithms — math — that has proven particularly good at solving certain types of computing problems that are difficult to define with explicit programming.

In his paper Deep Learning: A Critical Appraisal, New York University professor Gary Marcus explained, “Although deep learning has historical roots going back decades, neither the term ‘deep learning’ nor the approach was popular just over five years ago.” While scientists have been working on ways to make machines learn since the invention of the first computers, deep learning’s unique approach only became popular around 2012 when several researchers published papers on the topic.

In the years since, the technique has been applied to a lot of different problems, and it has proven remarkably adept at training computers to do a variety of things that have always been easy for humans but fairly difficult to teach to machines. Many AI researchers believe that deep learning will continue to be very influential in the coming years, but others, including Marcus, think that deep learning is of limited usefulness and will need to be supplemented by a lot of other techniques as AI research progresses.

3. Deep learning is “deep” because it has a lot of layers.

The name “deep learning” refers to the way in which these algorithms work, which is to process data through many layers. They take an input, create an output, and then use that output as the input for the next layer of learning. It starts by making very small abstractions or generalizations and then moving up to broader generalizations.

For example, imagine that you wanted to use deep learning techniques to teach a computer to recognize pictures of house cats. In the early stages, the system might try to classify all animals as cats. Then, after analyzing many images, it might begin classifying all small, fuzzy creatures as cats. Over time — and with lots of different layers of learning — the system might eventually become as good as people at recognizing pictures of cats.

The example on the previous slide is particularly appropriate because computer vision is one application where deep learning really excels. In fact, when the O’Reilly survey asked people which applications of deep learning most interested them, computer vision was the number one response. Other popular uses for deep learning include natural speech processing, game playing, translation, recommendation engines, text mining, forecasting, and analytics.

The thing that these use cases have in common is that it’s hard for people to write logical rules that will tell the computer what to look for. In the cat image example, someone might be able to tell the system that cats have four legs (usually) or that they have fur (usually), but that kind of logic can’t give the system all the information it needs to do the kind of intuitive analysis that people do all the time when identifying cats. The same problem occurs in natural language processing. Teaching the system the rules of grammar can only take you so far because there are so many exceptions to every rule.

Deep learning overcomes those limitations by having the computer figure out for itself which features in the training data are important for the task at hand, whether that task is identifying images, interpreting audio, or figuring out which movie you might like to watch next.

Cloud Power, Fear of Lock-in Grows Among IT Managers