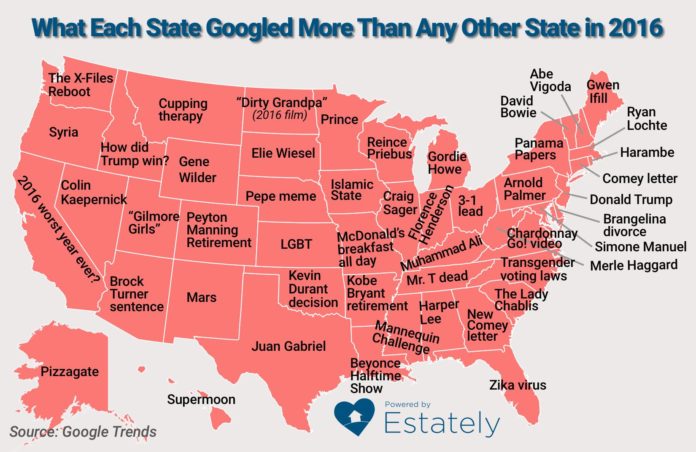 The United States did a lot of Googling this year.

Across the nation, people researched historical events, political developments, celebrity deaths, and a few pop culture moments, but in California, one of our most popular searches seemed to reflect how we felt about this year: “2016 worst year ever?”

Using Google Trends, real estate website Estately reviewed the biggest searches of the year to find out which topics states’ residents were searching for more often than residents were in any other state.

For California, that means our locals were looking up Elon Musk, deep learning, the Depp-Heard divorce, and “Martha and Snoop’s Potluck Dinner Party,” among other things.

Across the country, some of the states were Googling some pretty weird things: Montana learned about Cupping therapy; Virginia was interested in the Chardonnay Go! viral video; and Massachusetts wanted to know what actor Robert De Niro had to say about President-elect Donald Trump.

Read the source article at SFGate.

How to apply deep learning to real world problems