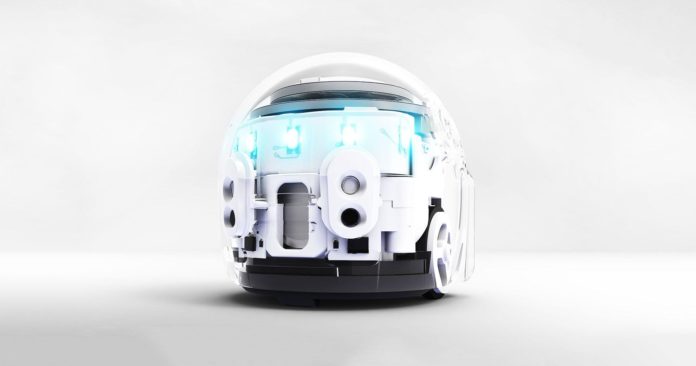 WHEN HIS DAUGHTERS were young, Nader Hamda says, they were really into apps and computers. But now that they’re a little older, their interest is waning. And that’s not unusual. “They’re not an exception,” he says. “They’re more of a rule.”

Sadly, this is true. According to numerous studies, young girls are moving away from computer science, not towards it. And Hamda says this is why his company, Ozobot, is now offering an educational robot called Evo. Evo is small and spherical, only about an inch in diameter. It looks kinda like an IBM Selectric type ball. But it’s also designed to be social.

It bloops and beeps out sounds meant to mimic human emotion—everything from a laugh to an “argh!”—and these sounds are complimented by flashing lights and spinning. If that doesn’t sound emotional, well, think R2D2. This, he believes, is the best way to attract both boys and girls to the wonders of computing, to prepare them for our inevitable robotic future. “The best way to engage is to introduce another way for them to socially interact,” Hamda says.

It’s certainly a worthy ambition. By 2020, according to oft-cited research from the Bureau of Labor Statistics, there will be 1 million more computer science-related jobs than graduating students qualified to fill them, and though women, underrepresented minorities, and young people from low-income backgrounds could fill this gap, studiesroutinely show that people from these groups leave science and technology fields at higher rates than their counterparts. In fact, the proportion of bachelor’s degrees in computer science earned by women has actually droppedfrom 37 percent in 1984 to 18 percent in 2014. Meanwhile,other studies show that early exposure can be crucial to developing a lifelong interest in computer science.

How to Map Out a Career Path in This Early Stage...