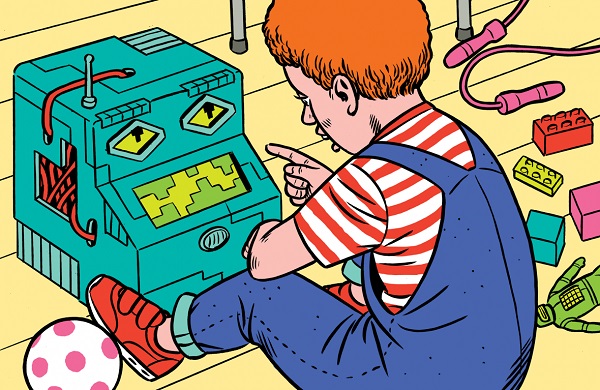 When it comes to digital assistants like Amazon’s Alexa, my four-year-old niece Hannah Metz is an early adopter. Her family has four puck-like Amazon Echo Dot devices plugged in around her house—including one in her bedroom—that she can use to call on Alexa at any moment.

“Alexa, play ‘It’s Raining Tacos,’” she commanded on a recent sunny afternoon, and the voice-controlled helper immediately complied, blasting through its speaker a confection of a song with lines like “It’s raining tacos from out of the sky” and “Yum, yum, yum, yum, yumidy yum.”

Giggling and clapping, Hannah danced around the room. I think this ability to get music on demand is neat, too, and I didn’t want to be rude, so I danced with her. But at the same time I was wondering what it’s going to mean for her to grow up with computers as servants.

The research firm eMarketer estimates that 60.5 million people in the U.S.—a little less than a fifth of the population—will use a digital assistant at least once a month this year, and about 36 million will do so on a speaker-based device like Amazon Echo or Google Home. These things are most popular among people age 25 to 34, which includes a ton of parents of young children and parents-to-be.

And these techno-helpers are not just going to get more popular; they will also get better at responding to queries and orders, and they’ll sound more humanlike, too. At the same time, young users like ­Hannah will become more comfortable and sophisticated with the technology, going beyond telling Alexa to play a song. They’ll request help with homework or control devices around their home.

It’s a little worrisome. Leaving aside the privacy implications of kids telling an Internet-connected computer all kinds of things, we don’t know much about how this kind of interaction with artificial intelligence and automation will affect how children behave and what they think about computers. Will they become lazy because it’s so easy to ask Alexa and its peers to do and buy things? Or jerks because many of these interactions compel you to order the technology around? (Or both?)

Some of that may happen. It seems more likely, though, that as with many technologies before this, the utility of digital assistants will outweigh their drawbacks. Already they’re making an incredible amount of data and computer-aided capabilities available directly to children—even those not yet in kindergarten—for learning, playing, and communicating. With Alexa, kids can get answers to all kinds of questions (both serious and silly), hear stories, play games, control apps, and turn on the lights even if they can’t yet reach a wall switch. And this is just the beginning of the kiddie AI revolution.

Unethical Use of AI Being Mainstreamed by Some Business Execs, Survey...

Avoiding a Society on Autopilot with Artificial Intelligence