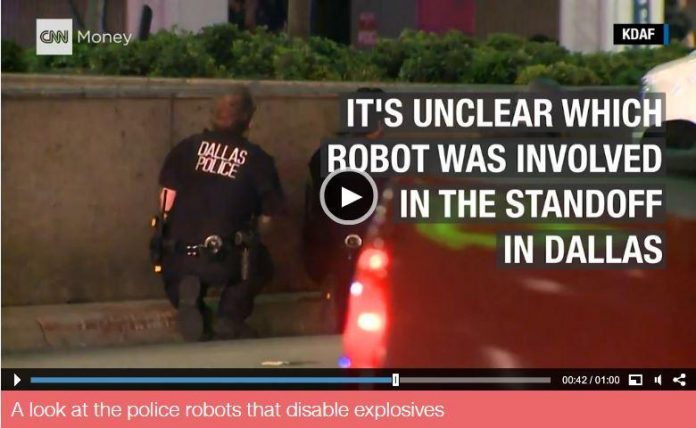 There’s nothing new about a dangerous suspect dying at the hands of police. But last Thursday night in Dallas, the situation played out with a twist. Micah Johnson, believed to have fatally shot five police officers, was killed by an explosive device that a robot delivered.

Two executives at robotic companies told CNN this is the first time a police robot has been involved in a civilian’s death.

“We saw no other option but to use our bomb robot and place a device on its extension for it to detonate where the suspect was,” Dallas police chief David Brown said at a news conference Friday morning. “Other options would have exposed our officers to grave danger.”

It’s unclear exactly what type of robot was used in the suspect’s death. Robots are common inside police departments, and generally used to disable explosive devices or disorient and incapacitate suspects that are barricaded. To do this, the robot generally carries a flashbang, a device that emits a bright light and loud sound. Sometimes these robots are used to place an explosive near a bomb in order to disarm it via explosion.

Northrop Grumman Remotec, which calls itself the largest providers of robots to first responders, declined to comment and referred all questions to the Dallas police department.

The robot was likely expensive, with a price tag of around $100,000, according to Endeavor Robotics chief executive Sean Bielat.

Endeavor Robotics sells its robots to agencies in the greater Dallas area, but wasn’t sure if its robot was used in Thursday’s incident.

These types of ground robots do not operate autonomously, but are under the control of a human operator. Similar models are used overseas to disable explosive devices in places such as Iraq. Using one to kill a suspect in the U.S. is unheard of.

Hobbyist scraped 40,000 Tinder selfies to make a facial dataset for...

Are AI Ethics Concerns of Tech Titans Real or Artificial?