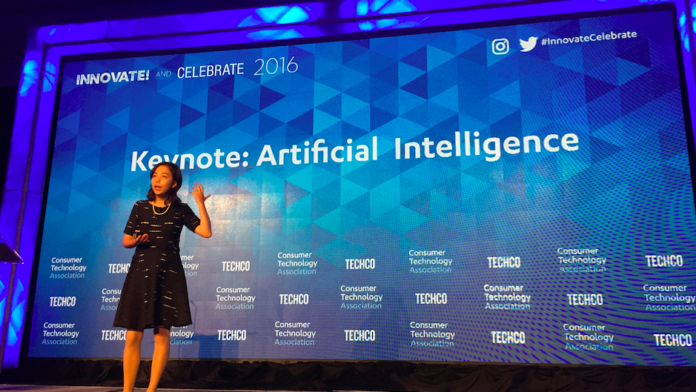 Right after the Startup of the Year competition finished, Fei Fei Li, the director of the Artificial Intelligence Lab at Stanford University, took the stage at Innovate! and Celebrate to welcome entrepreneurs, founders, and attendees to the conference with an in-depth discussion of artificial intelligence. And when we say in-depth, that is exactly what we mean.

Learning Visual Intelligence
Li started the discussion off by discussing the importance of vision when it comes to general intelligence. Going back more than 500 million years, she explained that there was no bigger evolutionary expansion than the development of one particular body part: the eyes. As she explains:

Flashing forward a few million millennia, Li touched on how technology has struggled to keep up with the human brain in terms of its ability to learn and see the way we do. In Li’s words, the key to creating computers that are as smart as we are is learning.

As many know and Li emphasized, artificial intelligence has become a staple of technology in recent years. Innovations like facial recognition software have made life so much easier in such a short period of time that it is already being take for granted by everyone from Facebook users to website creators. And machine learning is the driving force making it possible.

Read the source article at Tech.Co