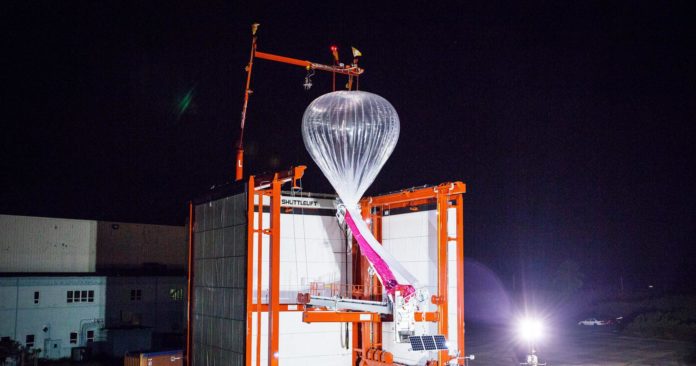 THIS SUMMER, THE Google X lab launched a balloon into the stratosphere over Peru, and it stayed there for 98 days.

Launching balloons into the stratosphere is a usual thing for the Google X lab—or just X, as it’s now called after spinning off from Google and nestling under the new umbrella called Alphabet. X is home to Project Loon, an effort to beam the Internet from the stratosphere down to people here on Earth. The hope is that these balloons can fly over areas of the globe where the Internet is otherwise unavailable and stay there long enough to provide people with a reliable connection. But there’s a problem: balloons tend to float away.

That’s why it’s so impressive that the company managed to keep a balloon in Peruvian airspace for over three months. And it’s doubly impressive when you consider that the navigation system can only move these balloons up and down—not forward and back or side to side. They move like hot-air balloons—avoiding the weather or catching it at the right time, rather than pushing right through it—and that’s because a more complex navigation system would be too heavy and too expensive for the task at hand. Rather than navigate Peruvian air space with some sort of jet propulsion system, the Loon team turned to artificial intelligence.

We use the term—artificial intelligence—in the broad sense. And why not? Everyone else does. But whatever you want to call the new algorithms that guide these high-altitude balloons, they’re effective. And they represent a very real and very large shift across the tech world as a whole.

In the beginning, you see, the Loon team guided its balloons largely with handcrafted algorithms, algorithms that would respond to a predetermined set of variables, like altitude, location, wind speed, and time of day. But the new algorithms make greater use of machine learning. By analyzing massive amounts of data, they can learn as time goes on. Based on what has happened in the past, they can change their behavior in the future. “We have more machine learning in more of the right places,” says Sal Candido, the former Google search engineer who oversaw this work on Loon. “These algorithms are handling things more efficiently than any person could.”