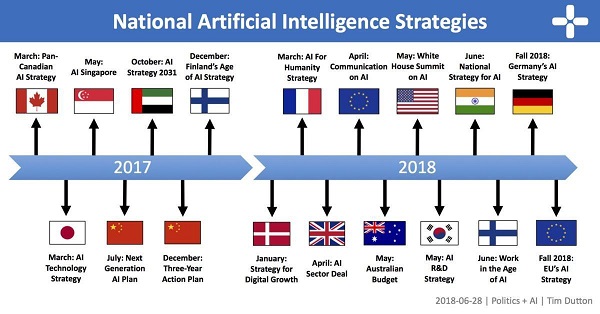 The race to become the global leader in artificial intelligence (AI) has officially begun. In the past fifteen months, Canada, China, Denmark, the EU Commission, Finland, France, India, Italy, Japan, Mexico, the Nordic-Baltic region, Singapore, South Korea, Sweden, Taiwan, the UAE, and the UK have all released strategies to promote the use and development of AI. No two strategies are alike, with each focusing on different aspects of AI policy: scientific research, talent development, skills and education, public and private sector adoption, ethics and inclusion, standards and regulations, and data and digital infrastructure.

I plan to continuously update this article as new strategies and initiatives are announced. If a country or policy is missing (or if something in the summary is incorrect), please leave a comment and I will update the article as soon as possible.

I also plan to write an article for each country that provides an in-depth look at AI policy. Once these articles are written, I will include a link to the bottom of each country’s summary.

Australia does not yet have an artificial intelligence strategy. However, in the 2018–2019 Australian budget, the government announced a four-year, AU$29.9 million investment to support the development of AI in Australia. The government will create a Technology Roadmap, a Standards Framework, and a national AI Ethics Framework to support the responsible development of AI. The investment will also support Cooperative Research Centre projects, PhD scholarships, and other initiatives to increase the supply of AI talent in Australia. In addition, in the its 2017 innovation roadmap, Australia 2030: Prosperity Through Innovation, the government announced that it will prioritize AI in the government’s forthcoming Digital Economy Strategy. This report is expected to be released in the second half of 2018.

Canada was the first country to release a national AI strategy. Detailed in the 2017 federal budget, the Pan-Canadian Artificial Intelligence Strategy is a five-year, C$125 million plan to invest in AI research and talent. The strategy has four goals: (1) increase the number of AI researchers and graduates, (2) establish three clusters of scientific excellence, (3) develop thought leadership on the economic, ethical, policy, and legal implications of AI, and (4) support the national research community on AI. The Canadian Institute for Advanced Research leads the strategy in close partnership with the Canadian government and the three new AI Institutes: the Alberta Machine Intelligence Institute (AMII) in Edmonton, the Vector Institute in Toronto, and MILA in Montreal.

Canada’s AI strategy is distinct from other strategies because it is primarily a research and talent strategy. It’s initiatives — the new AI Institutes, CIFAR Chairs in AI, and the National AI program — are all geared towards enhancing Canada’s international profile as a leader in AI research and training. The CIFAR AI & Society Program examines the policy and ethical implications of AI, but the overall strategy does not include policies found in other strategies such as investments in strategic sectors, data and privacy, or skills development. That is not to say that the Canadian government does not have these policies in place, but that they are separate from, rather than part of, the Pan-Canadian Artificial Intelligence Strategy.

China announced its ambition to lead the world in AI theories, technologies, and applications in its July 2017 plan, A Next Generation Artificial Intelligence Development Plan. The plan is the most comprehensive of all national AI strategies, with initiatives and goals for R&D, industrialization, talent development, education and skills acquisition, standard setting and regulations, ethical norms, and security. It is best understood as a three step plan: first, make China’s AI industry “in-line” with competitors by 2020; second, reach “world-leading” in some AI fields by 2025; and third, become the “primary” center for AI innovation by 2030. By 2030, the government aims to cultivate an AI industry worth 1 trillion RMB, with related industries worth 10 trillion RMB. The plan also lays out the government’s intention to recruit the world’s best AI talent, strengthen the training of the domestic AI labour force, and lead the world in laws, regulations, and ethical norms that promote the development of AI. The latter includes the intent to actively participate in and lead the global governance of AI.

Since the release of the Next Generation Plan, the government has published the Three-Year Action Plan to Promote the Development of New-Generation Artificial Intelligence Industry. This plan builds on the first step of the Next Generation plan to bring China’s AI industry in-line with competitors by 2020. Specifically, it advances four major tasks: (1) focus on developing intelligent and networked products such as vehicles, service robots, and identification systems, (2) emphasize the development AI’s support system, including intelligent sensors and neural network chips, (3) encourage the development of intelligent manufacturing, and (4) improve the environment for the development of AI by investing in industry training resources, standard testing, and cybersecurity. In addition, the government has also partnered with national tech companies to develop research and industrial leadership in specific fields of AI and will build a $2.1 billion technology park for AI research in Beijing.

Read the source article in Medium.