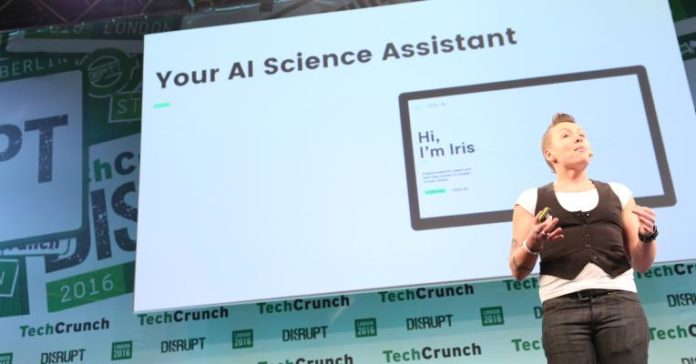 Most startups have a pitch. The team behind Iris AI has two: right now they’ve created an AI-powered science assistant that functions like a search tool, helping researchers track down relevant journal papers without having to know the right keywords for their search. But in future their big vision is their artificially intelligent baby grows up to become a scientist in her own right — capable of forming and even testing hypotheses, based on everything it’s going to learn in its science research assistant ‘first job’ role.

Such is the multi-stage, big picture promise of artificial intelligence. Yet convincing customers to buy into AI’s potential now, at what is still a pretty nascent stage in the tech’s development, remains a challenge. Evidence of superior efficacy is required. So here at Disrupt London the startup behind Iris is rebooting its business model — to focus on expanding the community of users for the tool, via events focused on demonstrating the utility of an AI assistant. And with an eye on steering Iris’ continued and future development via some tailored problem-solving. Two birds, one stone.

Their idea: ‘Scithons’, aka science hackathons. The aim is to bring together a community of problem solvers to help companies crack specific R&D challenges, while also putting Iris to work assisting in the problem-solving process and learning from specific problems and the solutions hacked together during the events. It’s a flipping of the team’s initial thought to sell custom pilots of Iris to companies with big R&D needs — although ultimately they do aim to sell their AI’s smarts as a software as a service. But first they need Iris to win fans and influence influential people. And learn — a lot.

“AI is kind of new to people,” says co-founder and CEO Anita Schjøll Brede. “Companies are intrigued but they don’t quite understand how it works and they’re a little hesitant sometimes. They’re curious but they want to see how it works — they want to really get a feel for it. So rather than trying to sell custom installations of the tool, what we’re doing right now… is that we’re launching these ‘scithons as a service’, or as an event concept.

“What we’re selling right now is the ability to host a scithon — where we find, from our community, 20, 30, 40 really smart, really driven talent from a variety of different backgrounds, and we get them together with this company partner that has a scientific challenge to solve. And let these teams sit down and compete for a prize set by the company. They compete for a number of hours to solve the challenge. So the company gets a solution to a challenge and access to some really smart, young driven people.”

Who is it targeting scithons at — and the Iris product more generally? Research consultancies and companies needing to solve hard scientific problems. Companies with both “heavy R&D requirements” but also multidisciplinary R&D needs, says Schjøll Brede, suggesting telecoms companies as one potential target. “It’s not just one thing you develop but there’s a variety of different fields that you need to be focused on,” she says of the target customers. “Also research consultancies that deal with a variety of different clients that all look at things from different angles.”

Another target: Companies at risk of being disrupted by smaller upstarts taking risky bets on new technologies like AI. So enterprises scared of disruption by startups… “We do need the ones that are willing to take a risk,” she adds. “The people that are seeing the disrupting trends of the world because, let’s face it, most of these big players — if they don’t do anything within the next few years they’re going to be outperformed. So we’re looking for those players who understand that ‘this AI thing, while we may or may not understand it, it’s coming for real and we need to embrace those new trends and technologies right now.”

Google’s Self-Driving Car Gets Into A Minor Accident While The AI...