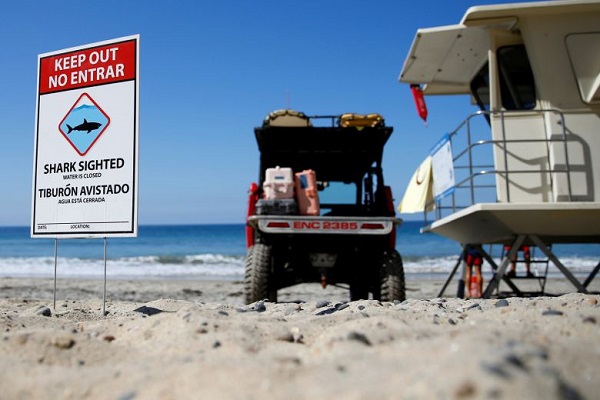 Does the idea to use artificial intelligence (AI), drones and electric force fields to prevent sharks from eating human bathers have teeth? Several tech start-ups in Australia say yes.

Officials in the United States are watching the advancements keenly, aware that climate change is altering migration patterns and threatening to push great whites ever closer to American shores.

This summer, sharks have attacked teenagers on beaches from California to New York and Cape Cod.

It uses AI to analyse 13 environmental factors that affect shark behaviour, including time of day, proximity to a river and recent rain.

These are combined with other data, such as the number of lifeguards on duty, to calculate the odds of being attacked.

In January, Ripper Group, which operates search-and-rescue drones in Australia, launched SharkSpotter, a deep-learning computer program that scans the ocean for sharks from the air.

The AI algorithm detects the animals based on their movement, speed, colour, texture, shape and swimming patterns.

When it spots a shark, the drone sends an alert to lifeguards and can drop inflatable devices to swimmers in immediate danger.

The drones were operating along 15 beaches in New South Wales last summer, and chief executive officer Eddie Bennet said they would patrol an additional 50 beaches this summer as more lifeguard associations jump on board.

The electricity-transmitting device emits a 3-D force field that causes unbearable spasms in a shark’s sensory systems, prompting it to turn away from its prey.

The portable device costs about US$500 (S$690) and can be worn on the ankle of a diver, glued to the gripping pad of a surfboard or stuck on the bottom of a boat.

Researchers have analysed hundreds of encounters between a baited decoy and sharks, including great whites, and determined in peer-reviewed research papers that the Shark Shield is the world’s only scientifically proven electric shark deterrent.

Several leading researchers back the three technologies and predict that a combination of drones and AI will obviate the need for the shark nets that have cordoned off swimming beaches, to the detriment of marine life, for almost a century.

The three start-ups are all run by conservationists who aim to not only prevent sharks from mauling humans, but to also stop humans from shooting sharks in retaliation.

Read the source article in The Straits Times.