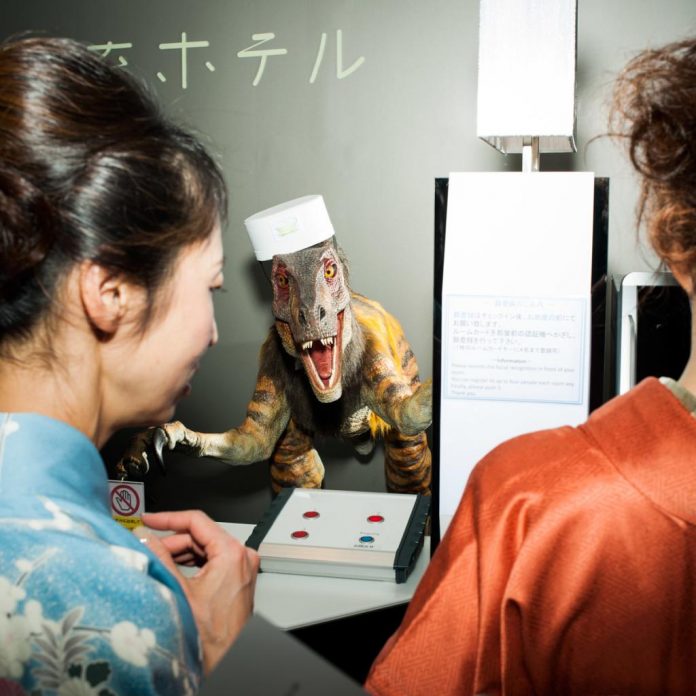 Japan has a national gift for holding in balance the stateliness of tradition and the marvel of novelty. So it ought to come as no surprise that on the western margin of the archipelago, on a serene bay in a remote area of the Nagasaki Prefecture, there is an enormous theme park dedicated to the splendors of imperial Holland. It follows with perfect logic that the historical theme park’s newest lodging place is the world’s first hotel staffed by robots.

The hotel, even before it opened last summer, had received extensive coverage in the international and domestic press for its promise of novel ease and convenience. But when I arrived at the Huis Ten Bosch theme park very late one humid summer night, just days after the fanfare of the robot hotel’s ribbon-cutting, nobody was quite sure where it might be found. Even the employees of the resort’s Hotel Okura, a towering replica of Amsterdam’s Centraal Station replete with stone reliefs and mansard roofs, discovered themselves unable to come to my aid. In rudimentary Japanese I asked where one might find the Henn-na Hotel. The name is an untranslatable double entendre: The literal meaning is “Strange Hotel,” but it’s very close to the word for “evolve”; it’s designed to acknowledge the slight uncanniness that might attend the coming hospitality singularity. The dual meaning, however, seemed lost on the Okura’s concierge, whose rigorous training hadn’t prepared her to counsel swarthy, disreputable-seeming, late-arriving foreigners in search of evolved accommodation. I did a little Kraftwerk automation dance to clear things up, but it only seemed to alarm her further.

Google Isn’t Giving up on Robots