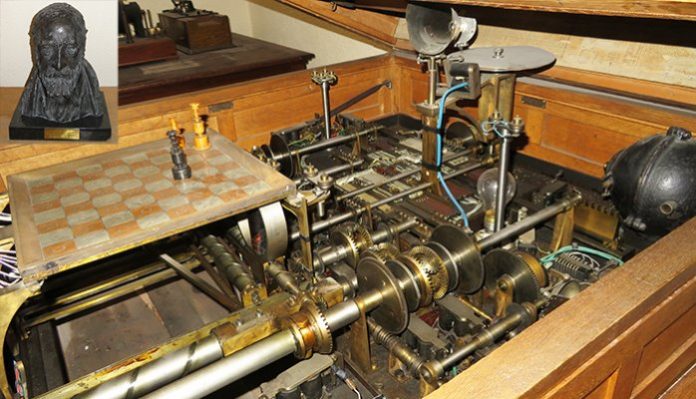 Today I was invited to give a KeyNote Lecture about Artificial Intelligence in the beautiful city of Zaragoza, by Javier Khunel the CEO of the main business school there, media group Heraldo and CaixaBank, to a diverse audience of business owners, entrepreneurs, c level execs, intrapreneurs and  many more, at  a great venue The CaixaForum building.

I have been in the field for the last 21 years, and the last ones as clear advocate of AI and Deep Learning, with a company in the field, and advising Emotiv Inc the Leader in Brain Computer Interfaces about Data Science and Artificial Intelligence. So it is fair to say that I play in a field I know very well.

Anyway I always get my facts and figures up to date, and to my surprise I discover an amazing fact: the father of Artificial Intelligence according to the MIT Technology Review is from my own backyard so to speak, from the country I was born Spain. Dr Leonardo Torres Quevedo, a true “Leonardo” of the beginning of the XIX century.

He develop a machine in 1912 called “El Ajedrecista” or “The Chess Player” a very limited precursor of IBM’s Deep Blue, and the first true chess computer, but by all means a pioneer (electro mechanical) work in the Artificial Intelligence field, he also build an Algebraic Formula Machine and many other mostly unknown marvels.

I rapidly find out, that a relative unknown museum in Madrid, has the original pieces built by Torres Quevedo, only open to public visits, by request. So talked toManuel Romana, Deputy Director of International relations at the UPM School of Civil Engineering in charge of the museum, and gladly and willingly show me the Torres Quevedo original treasures.

I have also a very deep link with Chess, a game where I won several medals (like the one shown in the next picture) in my early 10s, until I discover the magic of computing.

The Chess Automata from Tores Quevedo was limited to a specific set of chess pieces, but it even include a speaker to automatically state the check mate, lights and many other mechanical wonders, we needed anyway almost 100 years to make it work with “intelligence”.

He also worked in his “Machine for resolving algebraic formulas”

A First aproach to a remote control “Telekine“( a bit bigger)

The “Spanish Aerocar” still in use in Niagara Falls 100 years later, dirigible baloons and many other wonders.

It is great to find out, how pioneers create the future, way ahead of its time, and it is encouraging for all of us, to follow their steps and be brave enough to discover what is to come.

Curiously another pioneer, in this case of Neuroscience is from Spain Santiago Ramon y Cajal, two fields I love and where I am actively involved.

So we are privileged to be standing on the shoulders of giants.

The Rise of the Artificially Intelligent Hedge Fund