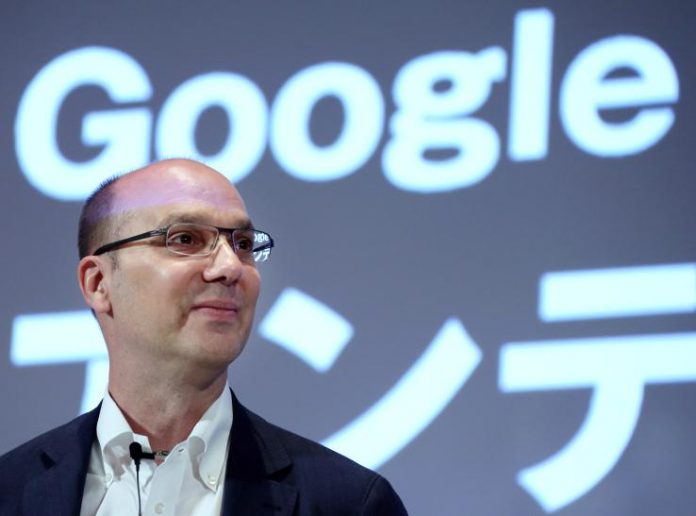 Andy Rubin, the creator of Android — arguably the widest distributed operating system in the world — left Google a few years back to start a hardware incubator with a $300 million fund called Playground.

Since then, he’s been pretty busy trying to envision the future of hardware. And that doesn’t just include robotics. At the Bloomberg technology conference he showed off two pieces of hardware: a transponder for drones and a backpack that basically provides haptic feedback alongside music. Both of them represent some kind of new, novel way that the real world can interact with the internet and data — and that’s where Rubin thinks the next big bets in technology should happen.

“I think the new opportunity is to bring that data from offline sources, not the cloud,” Rubin said at the Bloomberg technology conference. “That’s where robotics comes in. Robots are walking, mobile sensors that can sense their environment, interact, and learn from those interactions. In computer science we call that sense, plan, act. The act part, from a historical perspective, if you were doing stuff in the cloud you were trapped in the cloud. If you can’t interact with the real world you’re stuck in a jar. The robotics is the act part, once you sense and plan you can send it back into the real world.”

At Playground, Rubin and his team — a bench of around 15 engineers that are experts in fields like computer science and mechanical engineering — are incubating around 15 companies, Rubin said. The way it works is that companies that are basically envisioning new ways of how computing can interact with the real world come up, they’re given the resources — and financing — figure it out and then head off into the real world.

The applications of what Rubin and his team are working on aren’t necessarily in hardware. Rubin mentioned that he’s also incubating a quantum computing company that he wouldn’t name. But even then that is a play on rethinking the underlying architecture behind computing that will figure out how to take AI applications to a new level — while still using the standard manufacturing processes, he said.

“When the opportunity comes, this is like aligning the stars,” Rubin said. When everything is perfectly aligned boom, you should start it.