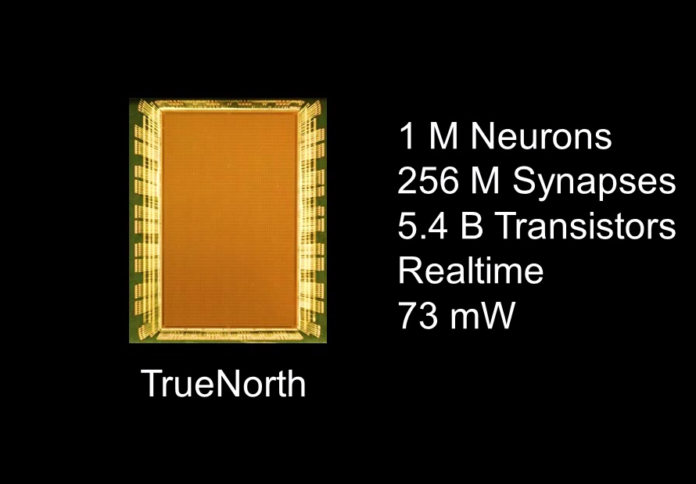 Scientists at IBM Research – Almaden have demonstrated that the TrueNorth brain-inspired computer chip, with its 1 million neurons and 256 million synapses, can efficiently implement inference with deep networks that approach state-of-the-art classification accuracy on several vision and speech datasets. This will open up the possibilities of embedding intelligence in the entire computing stack from the Internet of Things, to smartphones, to robotics, to cars, to cloud computing, and even supercomputing.

The novel architecture of the TrueNorth processor can classify image data at between 1,200 and 2,600 frames per second while using a mere 25 to 275 mW, which is effectively greater than 6,000 fps per Watt. Like that kung fu master in the movies who simultaneously fights assaults from many opponents, this processor can detect patterns in real time from 50-100 cameras at once – each with 32×32 color pixels and streaming information at the standard TV rate of 24 fps – while running on a smartphone battery for days without recharging.

The breakthrough was published this week in the peer-reviewed Proceedings of the National Academy of Sciences (PNAS). The essence of the innovation was a new algorithm for training deep networks to run efficiently on a neuromorphic architecture, such as TrueNorth, by using 1-bit neural spikes, low-precision synapses, and constrained block-wise connectivity—a task that was previously thought to be difficult, if not, impossible. The neuromorphic deep networks can be specified and trained with the same ease-of-use as contemporary deep learning systems such as MatConvNet, thus removing the need for data scientists to learn the intricacies of TrueNorth’s architecture.

How Much Longer Will it Take Until a Robot Wins a...