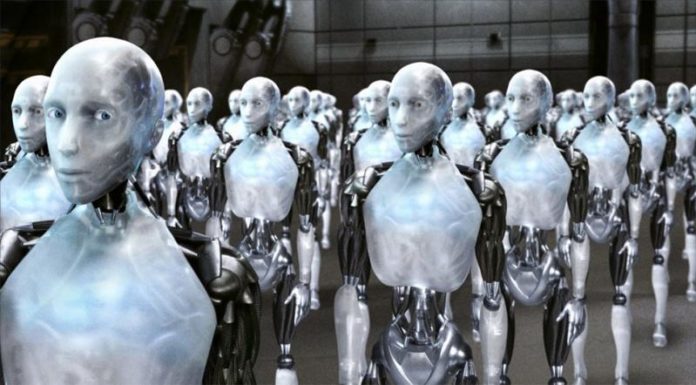 During my commute the other day, I ended up on a dark subway car. The train still had power—the air conditioning was on, the announcements were coming through—but all the lights were dead. I live near an above-ground stop, so at first there was morning sunshine coming in through the windows. But when the train went underground, we were plunged into complete darkness. I found myself suddenly in a sea of floating, ghostly faces, illuminated by the glow of smartphones. It was beautiful, in a vaguely dystopian way. It looked like a human version of Yayoi Kusama’s Infinity Mirrored Room. It looked like the end of a Twilight Zone episode where the robots had won.

The internet was originally built to withstand nuclear war. It’s decentralized, so even if part of its physical workings were destroyed, there are many other parts remaining, some run by wind or solar power, some in high-security bunkers. It’s not crazy to speculate that, in the case of an apocalypse, the internet might be one of the last standing traces of human technology. Sometimes I think it would be kind of funny if the last evidence of humanity was a Twitter bot, still tweeting into the void.

The first time I was contacted by a Twitter bot was a couple years ago, after Margaret Atwood replied to a tweet I’d tagged her in. Being @-ed by a user as high profile as Atwood must have put me on some whitelist for spambots; over the next few months I received tweets that ranged from exclamations with no context (“I aint got time for it tonight!”) to punctuational gibberish (“ˆ¯ „„ „ˆ ‚   · ˆ„  ¯‚ … …„ˆ ¨ „ „…… ¨´”). Some had snippets from tweets that other users—actual humans—had tagged me in. Some were accompanied by images, from a picture of the Kansas State Wildcats mascot to a Samsung ad. One read “MdQKqPlCLM to keep the federal government” and was illustrated by a photo of Jake Gyllenhal walking up a spiral staircase. The common factor uniting them was that each tweet came from an account that looked like a postmodern literary experiment gone wrong.

They were hilarious to me in the same way CAPTCHA combinations are often hilarious; that is, by accident. The unselfconsciousness is what made it funny, like a penis-shaped mushroom or a puppy fart.

But the tweets were also fascinating. With algorithms that drew text and photos from other accounts, they’d become a smorgasbord of cultural artifacts. One bot had created a collage from photos of Taylor Swift’s perfume, the latest iPhone model, and a selfie. They repurposed song lyrics, inspirational quotes, passages from novels, and pleas for more followers. They were like fun house mirrors, reflecting our words and photos twisted out of context, without human reason to familiarize them.

They’re Racking up the Miles, but Are Self-Driving Cars Getting Safer?