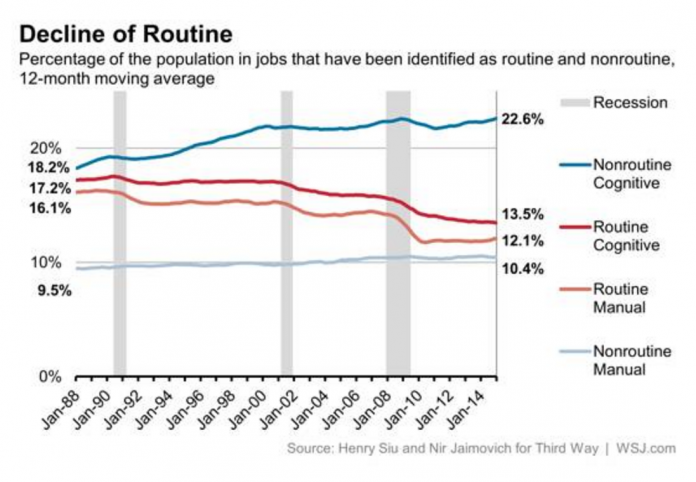 On yesterday’s investor call, Facebook founder and CEO Mark Zuckerberg was asked how the machine learning technology behind its recent introduction of bots to Messenger would manifest itself in the future. “So the biggest thing that we’re focused on with artificial intelligence is building computer services that have better perception than people,” he replied. “So the basic human senses like seeing, hearing, language, core things that we do. I think it’s possible to get to the point in the next five to 10 years where we have computer systems that are better than people at each of those things.”

There are a couple of striking things about this statement: it imagines computer systems with abilities that are central to our existence as biological creatures, the essential skills that we rely on to understand and interact with the world. And it then assumes that a wide variety of jobs currently done by people will no longer require expensive human labor, because artificial intelligence will be superior.

Zuckerberg does draw an important line in the sand. “That doesn’t mean that the computers will be thinking or be generally better,” he says, faint but important praise for us meatbags. Thinking in this context means something more complex than understanding how to carry on a conversation or tell a cat from a dog. It’s about being able to do a wide variety of different things well, synthesizing disparate topics, and learning on your own in an unpredictable and unsupervised environment. “Generally better” is being used in the sense that we are generalists, capable of handling a wide universe of tasks.

We can build a machine that beats the best human at the game of Go, but that same machine can’t stop in the middle and write a poem about about its style of play. It can’t learn a much simpler game, like checkers, without lots of human help first. Yan Lecun, the director of AI research at Facebook, put it this way:

Yes! There will be a bot for that and everything else…

Why & How Chatbots will Dominate Social Media