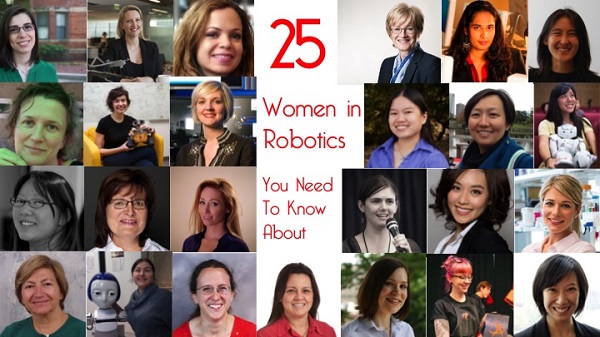 Editor’s note: In celebration of International Women’s Day, we’re reposting our 2016 ‘25 Women in Robotics You Need to Know About‘ list. Over the last four years, Robohub has featured 100 inspiring women leading future developments within robotics, with plenty more for the years to come!

We’re showcasing women working in research, development, and commercialization of robotics. The role models are diverse, ranging from emeritus to early career stage. Even though the total number of women in robotics is still relatively small, we’re celebrating that women are leading the way within this field.

Role models are important. Countess Ada Lovelace, the world’s first computer programmer and an extraordinary mathematician, faced an uphill battle in the days when women were not encouraged to pursue a career in science. Fast forward 200 years, there are still not enough women in science, technology, engineering or math (STEM). One key reason is clear: a severe lack of visible female role models. Women in STEM need to be equally represented at conferences, keynotes, magazine covers, or stories about technology. Although this is starting to change, it’s not happening quick enough.

To address that challenge, Suw Charman-Anderson started Ada Lovelace Day in 2009 in response to the lack of visibility of women in STEM (not the lack of women). It’s an international day celebrating the achievements of women in STEM. Everyone is encouraged to add an event or a story to the Finding Ada site.

A recent study from the Clayman Institute for Gender Research at Stanford found that visibility was the missing factor preventing women from moving into leadership positions within their organization. This has a cumulative effect on career progression and earnings. These findings support an earlier study with the Anita Borg Institute, who interviewed 1800 women in technology companies. According to the authors, women reported being less likely than male counterparts to be assigned to high visibility projects, which in turn, has a negative impact on their chances for future promotions.

Read the source article at Robohub.org.