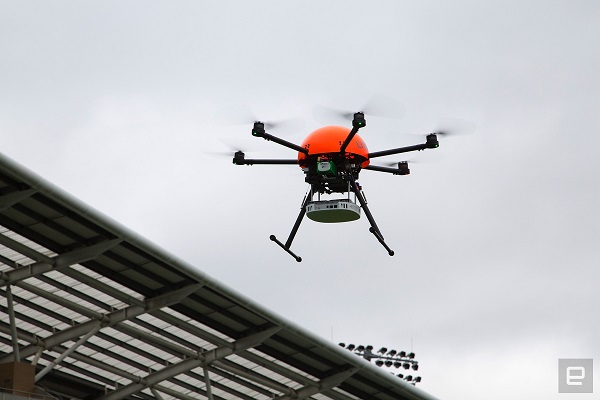 A startup called Exyn Technologies Inc. today revealed AI software that enables drones to fly autonomously, even in dark, obstacle-filled environments or beyond the reaches of GPS. A spin-out of the University of Pennsylvania’s GRASP Labs, Exyn uses sensor fusion to give drones situational awareness much like a human’s.

In a demo video shared by the company with TechCrunch, a drone using Exyn’s AI can be seen waking up and taking in its surroundings. It then navigates from a launch point in a populated office to the nearest identified exit without human intervention. The route is not pre-programmed, and pilots did not manipulate controls to influence the path that the drone takes. They simply tell it to find and go to the nearest door.

According to Exyn founder Vijay Kumar, a veteran roboticist and dean of Penn’s School of Engineering, “Artificial intelligence that lets drones understand their environment is an order of magnitude more complex than for self-driving cars or ground-based robots.”

That’s because the world that drones inhabit is inherently 3D. They have to do more than obey traffic laws and avoid pedestrians and trees. They must maneuver over and around obstacles in un-mapped skies where internet connectivity is not consistently available. Additionally, Kumar said, “With drones you actually have to lift and fly with your payload and sensors. Cars roll along on wheels and can carry large batteries. But drones must preserve all the power they can for flight.”

The AI that Exyn is adapting from Kumar’s original research will work with any type of unmanned aerial vehicle, from popular DJI models to more niche research and industrial UAVs. Exyn Chief Engineer Jason Derenick described how the technology basically works: “We fuse multiple sensors from different parts of the spectrum to let a drone build a 3D map in real time. We only give the drone a relative goal and start location. But it takes off, updates its map and then goes through a process of planning and re-planning until it achieves that goal.”