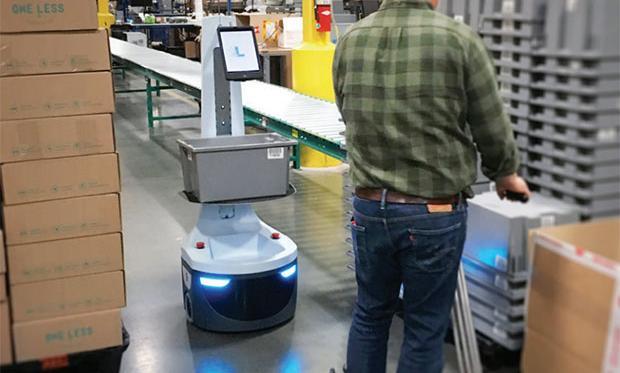 Photo: Locus Robotics robots are designed to work collaboratively with human workers in a warehouse. When a worker sees a robot waiting near a shelf, the worker reads the item needed off a screen, picks the item, and places it on the robot. The robot then drives to the location of the next item. Locus says it’s an efficient system because humans are doing what they’re best at, which is identifying and picking objects off of shelves.

In 2012, Amazon bought Kiva Systems for just over three quarters of a billion dollars, securing for itself virtually the entire large-scale robotic logistics market all at once. This was a particular problem for existing Kiva customers, including Quiet Logistics, who used Kiva robots to support centralized warehouse operations for a variety of clients. Once Quiet Logistics’ contract with Kiva ran out, they’d need to find some new robots.

Recognizing the enormous value that Kiva robots provided and the potential of the void that suddenly existed, a bunch of companies began to target the robotic warehouse fulfillment space. There’s Adept, Fetch, Clearpath, IAM Robotics, and Magazino, to name just a few. Rather than rely on a new platform from someone else, Quiet Logistics decided to develop its own fulfillment robot. Quiet’s internal robotics project was spun out into Locus Robotics in 2014, with $8 million in Series A funding announced this May. Bruce Welty is the chairman of Quiet Logistics, as well as the founder and chairman of Locus Robotics. We spoke to him about the problems he saw with Kiva’s robots, how to develop a robot from scratch, and why warehouse robotics is predominantly a software problem.