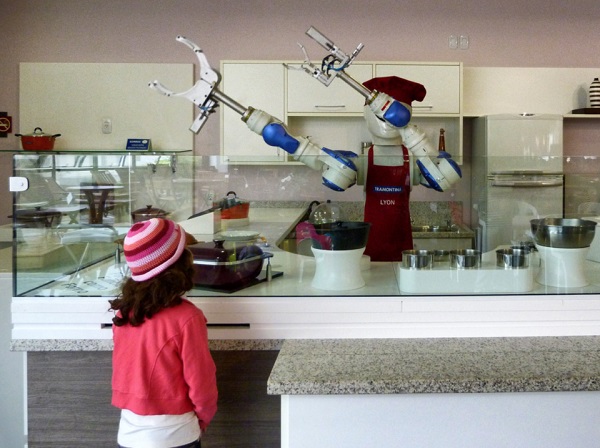 If we say that robots can solve a fairly small set of problems today, we can ask what are the key challenge to having robots become more integral or indispensable to our day to day lives?

That was the beginning theme of a session at the 2017 MIT Technical Conference focusing on the state of robotics and AI, a panel moderated by Liam Paull, research scientist with the MIT Computer Science and AI Laboratory (CSAIL). He is helping to lead CSAIL’s Autonomous Car Project being supported by Toyota.

“The key is to have robots function in a normal environment – today, too many things can go wrong,” in the view of Prof. Stefanie Tellex of Brown University, who concentrates on creating robots that interact with people using language, gesture and probabilistic inference. “We need to make robots more robust,”she said.

“Autonomous is an ambiguous term,” suggested Helen Greiner, co-founder and CTO of CyPhyWorks, a startup focused on multi-rotor drones for commercial use, and a co-founder if iRobot, maker of the Roomba intelligent vacuum. “The Roomba is autonomous for the vacuuming mission,” she suggested, “and that is a small task.” To make robots more universally useful, “It will take a combination of better mobility, better perception of the data and more AI,” she said.

Some discussion ensued on whether we are at the inflection point with AI, of hockey stick upward growth. Greiner said when iRobot was started in 1990, they would not have guessed that 60 million Roomba robots would be sold and deployed into the market today. “Connecting to the cloud and deep learning is really the new inflection point,” she said.

It’s difficult for robots to operate in environments that present the unexpected, such as construction sites, where a driver has to decide with the orange cones or the police officer should be primarily respected. “These are challenging for robots to interpret,” Greiner said.

Ryan Gariepy, co-founder and CTO of Clearpath Robotics, suggested the problem set needs to be simplified. “What is hampering robotics, is trying to solve all the problems,” he said. “In self-driving cars, we immediately aim at level 5 autonomy [fully autonomous] on city streets – that is challenging. There are a set of problems that are easier to solve.”

Clearpath is focused on custom industrial automation; its mission is to “automate the world’s dullest, dirtiest and deadliest jobs.” Gariepy suggested that investors are focused on $3 billion opportunities in robotics, when there are more $250 million opportunities that “VCs and developers are not focused on right now,” that can solve real problems also.

His company is now working on helping existing factories and warehouses incorporate robots into the way they work, without having to engineer the environment so that the robot can be productive, like Amazon Kiva requires. “A factory or a warehouse is an indoor city, but it has no weather conditions and the people there are trained,” Gariepy said. “That allows us to look at the human-robot interaction more. It’s a step-by-step process and we’ve been slowly stepping along the way. “

In a recent demonstration for a new potential customer, Gariepy said Clearpath got its robots to demonstrate how they can deliver value inside an hour, with no changes to the factory. ‘That is very different from the green field that Kiva requires,” he said.