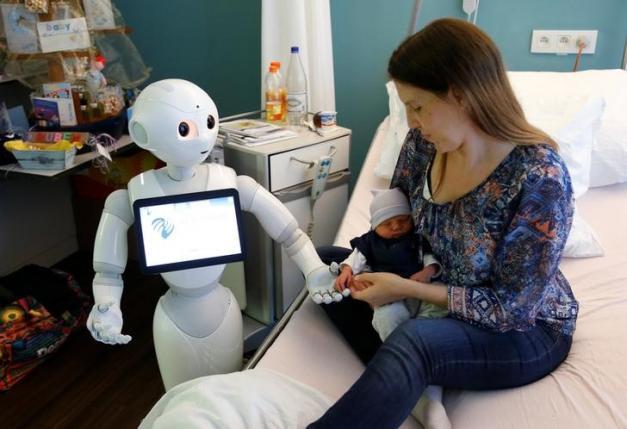 Developed to improve social and health care by the Belgian company Zora Bots, Pepper joined the medical team as a receptionist at Ostend hospital AZ Damiaan.

Pepper will introduce visitors to the hospital, provide information and guide visitors and patients to the correct floor and room.

With a speed of just 3 km/h (1.8 mph), Pepper is also able to guide slower patients. Fully charged, it can work for up to 20 hours on its own.

“The robot itself is a meter 20 high, so it is not like Arnold Schwarzenegger with a leather jacket and an ‘I will be back’ robot,” said Zora Bots’ co-chief executive, Fabrice Goffin. “It is a quite nice robot and the reactions are positive for the moment.”

During the first week, Pepper was mainly used on the hospital’s maternity department.

Bieke Vandeputte, the mother of a newborn baby, was amazed.

“it is another way of making contact and maybe it is reassuring that it is a robot for some people,” she said. “The baby was really sure. He did not mind putting his hands on it. It did not frighten him so I think it will be important. Especially for children.”

Pepper is not the first robot used at the AZ Damiaan hospital, but it is the first to communicate with patients and to have the ability to guide them.

Before the arrival of Pepper, the staff had already worked with a predecessor, Zora, for about a year. Zora is smaller and slower than Pepper and used mainly in physical therapy classes.

At a price of 30,000 euros, Pepper is expensive. So far, only Japanese customers have bought one to use at home.

Read the source article at reuters.com

Self-Driving Cars Will Be Ready Before Our Laws Are