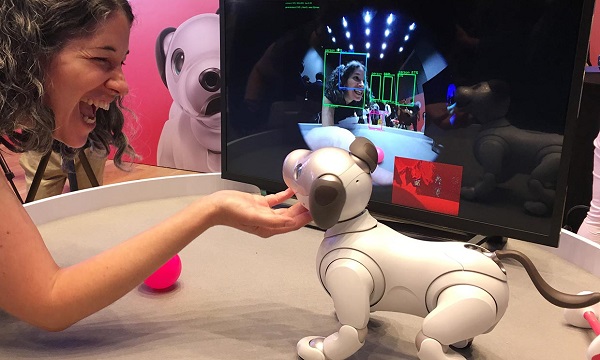 This past November, Sony announced that it was reviving its robot dog Aibo. The iconic robotic pet, introduced in 1999, won a lot of fans all over the world but had been discontinued for over a decade. The company said the new Aibo, with more advanced mechatronics and AI, would be available for purchase early this year, but only in Japan.

Now Sony is announcing that, after selling 20,000 new Aibos to Japanese consumers, it is making the robot canine available also in the United States. At an event at its U.S. headquarters in New York City, the company said it will be offering a “limited first litter edition” bundle starting next month, with expected delivery before the holidays.

This is the sixth generation of Sony’s robot dog. The biggest difference from previous models is a new cloud-based AI engine, which relies on a powerful on-board computer and advanced image sensors to make Aibo smarter and more lifelike. The new Aibo can recognize its owner’s face, detect smiles and words of praise, and learn new tricks over time.

And of course, it loves to be petted.

What hasn’t changed much with the new Aibo is the hefty price tag. The bundle will retail for US $2,900. It include an Aibo, Aibo toys, Aibo dog tag, and a charger. Also part of the package is a three-year cloud subscription plan, which is required for users to explore all features of the Aibo app.

Sony says the new product reflects its focus on the Japanese philosophy of “kando” to create an emotional connection with your new robot friend. Mike Fasulo, president and chief operating officer of Sony Electronics North America, said Aibo’s new dog-like capabilities will allow it to connect with its owners by “creating an experience so real and immersive that technology enhances the emotional enjoyment.”

Aibo’s software uses deep-learning algorithms to recognize images and sounds. The robot also uploads a range of data based on its day-to-day experiences to Sony’s cloud, powered by Amazon Web Services. The cloud works as a database and AI engine to create each robot’s unique personality, which evolves over time. Future iterations will be able to learn where locations like the kitchen are, so that it can go to a particular room on command.

But in addition to new software, Aibo also received a massive hardware upgrade. It’s powered by a Qualcomm Snapdragon 820, with 4 GB RAM and 32 GB ROM, plus Wi-Fi and LTE. It also integrates two cameras (one for image recognition and one for SLAM), time-of-flight sensor, three touch sensors, four microphones, motion detector, light detector, and inertial measurement units in the head and body. To move its neck, mouth, legs, ears, and tail, Aibo uses 1- and 2-axis actuators, for a total of 22 degrees of freedom. Its eyes are OLED displays.