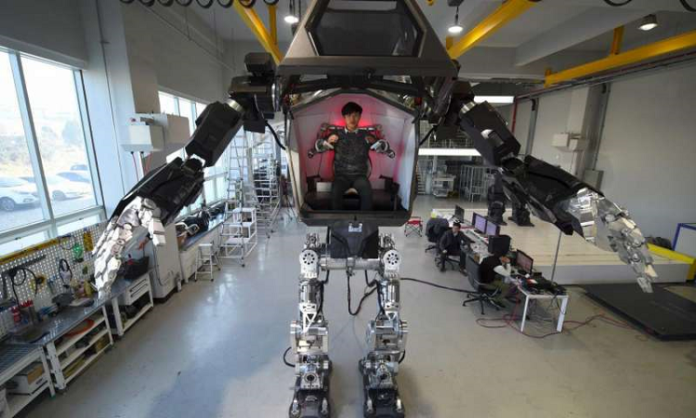 A giant South Korean-built manned robot that walks like a human but makes the ground shake under its weight has taken its first baby steps.
Designed by a veteran of science fiction blockbusters, the four-metre-tall (13-foot), 1.5 ton Method-2 towers over a room on the outskirts of Seoul.

The hulking human-like creation bears a striking resemblance to the military robots starring in the movie “Avatar”.

It is claimed as a world first by its creators at Hankook Mirae Technology, a South Korean robotics company, where about 30 engineers were hard at work conducting initial tests Tuesday afternoon.

A pilot sitting inside the robot’s torso makes limb movements which are mimicked by Method-2, whose metal arms each weigh 130 kilograms (286 pounds).

The robot, more than twice the size of a tall man, is so heavy that it shakes the ground when it takes a step with a loud whirring of motors.

Yang, who dreamed as a child of building his own robot, said he has invested 242 billion won ($200 million) in the project since 2014 to “bring to life what only seemed possible in movies and cartoons”.

Building the giant robot was a challenge for the engineers—most of them in their mid and late 30s—as its unprecedented scale meant they had nothing to refer to, said one who declined to be named.

So far, it remains unclear how the robot will be used. Method-2 is seen more as a test-bed for various technologies that will allow the creators to build any type and size of robot in future.

Read the source article at phys.org.

Viv & Siri Creator Tell Us Why We’ll Soon Talk To...

4 Ways AI Will Change Just About Everything