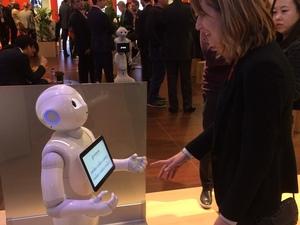 SoftBank’s Pepper robot may still be the better-known contender, but a new humanoid device from Hitachi aims to be the in-store sales rep of the future.

Called EMIEW3, the roughly 3-foot-tall unit can determine when customers need help and then approach them autonomously, Hitachi said on Friday. Using what it calls “remote brain” technology, the company developed the robot with customer service in mind for use in stores and other public venues.

EMIEW3 is actually the latest iteration in a series following Hitachi’s introduction of the original EMIEW back in 2005. EMIEW2, announced in 2007, featured capabilities such as the ability to move at a brisk human walking pace and to distinguish the human voice from background noise.