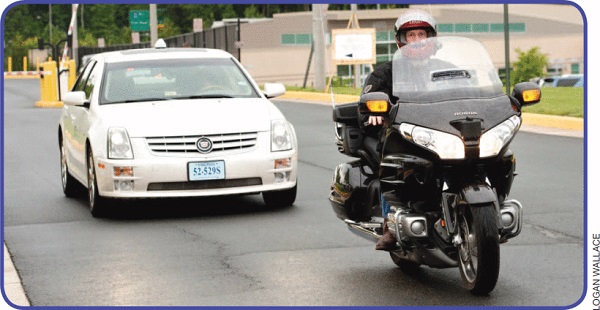 Here’s some sobering statistics for you. In the United States, approximately 13% of all car related crash deaths are motorcyclists. That’s a sizable proportion.

Indeed, I would assert that all car drivers need to be aware of and anticipating motorcyclists.  Doing so is done to hopefully avoid getting entangled into a deadly embrace with a motorcycle, and spare too the lives of those riding on the motorcycle, along with avoiding correspondingly related car driver deaths and car occupant deaths.

On my own daily personal commute on the freeway, I see at least one downed motorcyclist on the average each day. That’s right, one per day. That’s nuts! Most of the time, the motorcyclist appears to be Okay and they are usually either laying on the freeway or getting up and trying to standup their motorcycle. Sometimes, sadly, I see the aftermath and there is a mangled motorcycle, there are ambulances, and a body draped with a tarp on the ground. Visually, this is all very striking and a constant reminder of the dangers of motorcycle riding.

By far, motorcyclists tend to be males. Of female motorcyclists that died in crashes, 61% were riding as a passenger on the motorcycle.  If you are interested in additional details about motorcycle accident statistics, take a look at the annual counts published by the National Highway Traffic Safety Administration (NHTSA).

What does all of this have to do with self-driving cars?

At the Cybernetic Self-Driving Car Institute, we are developing AI that helps self-driving cars to avoid getting entangled with motorcyclists.

This is the equivalent to a human driver that is unaware of motorcyclists around them while driving.

Regrettably, there are human drivers that are clueless when it comes to motorcycles and being on-guard about them. Those drivers have their head-in-the-sand and just assume that any motorcyclist stupid enough to get entangled with a car deserves what they get. Must be some kind of Darwinian process, these drivers assume. Focus on cars, rather than motorcycles, and besides how much damage can a motorcycle cause to their car. Just not worth the energy to think about motorcyclists. They are like fleas that happen to be around but no need to be defending against them.

What is perhaps even worse are the human drivers of cars that are out to get motorcyclists.

Let me explain that point. During my daily commute, I see motorcyclists that weave in and out of traffic, and manage to therefore avoid the doldrums of the inch-at-a-time bumper-to-bumper agony of us in cars. Believe it or not, I often see car drivers that appear to purposely try and place their car in the path of a motorcyclist. It is as though the car driver is angry about the motorcyclist being able to freely traverse the crowded roadway. These drivers seem to be saying to themselves, I’ll show that no good son-of-a-gun that they can’t just zip all around, I’ll put my several ton weighing car right in front of that motorcyclist and force them to slow down or altogether keep from getting in front of me. That’s the twisted thinking that seems to be happening with those envious car drivers.

There are car drivers that are normally observant and tend to be mildly wary of motorcyclists. These car drivers aren’t especially on the alert about watching for a motorcycle and only think about a motorcycle when one gets a bit close or otherwise draws attention. At least they aren’t ignoring motorcycles entirely.  We’ll refer to them as “normal” car drivers with respect to motorcycle awareness.

Here’s what we have:

Next, imagine a 2-by-2 grid with these aspects. We’ll put the car driver categories on the vertical axis and put the motorcyclist categories on the horizontal axis.  This gives us four instances, consisting of D1:M1, D2:M1, D1:M2, D2:M2.

Here’s my take on these intersecting categories.

D2: M1 (Car driver crazy, Motorcyclist normal awareness), which I am betting is one of the highest death rates since this consists of car drivers that are purposely trying to harm motorcyclists.

D1:M2 (Car driver normal awareness, Motorcyclist crazy), which I am betting is another high death rate since the motorcyclist is purposely putting themselves into harm’s way.

At least we ought to ensure that no self-driving car becomes a D2.

A self-driving car should be using its sensors to detect motorcycles. The AI then needs to anticipate what the motorcyclist will do. This anticipation then needs to be turned into action. Our AI component for motorcycle entanglement avoidance has embodied within it the various approaches that motorcyclists often take.

HOV Lanes. Motorcyclists will often be in an HOV lane. This is usually legal and indeed by design a legal aspect since the viewpoint of society is that the motorcycle is a less polluting vehicle. But, where things go amiss is when the motorcyclists decide to dart into and out of the HOV. Whether this is legal or not is a moot point. It happens. A self-driving car needs to be aware that a motorcycle in a HOV lane might at any moment wander out of it. Or, a motorcycle might decide to dart across lanes of traffic to get into an HOV, even if not at the appropriate place to do so.

Lane Splitting. Motorcyclists in many states are allowed to split lanes. This means that they can go between cars and make their way without being quite so obvious. Self-driving cars need to anticipate that a motorcyclist is not bound by the normal conventions of a car. A motorcycle can at any moment zoom right along and narrowly skirt past the self-driving car.

Front of Intersections. Motorcyclists will often opt to meander through stopped car traffic, such as at a red light, and make their way to the front of the pack. A self-driving car that was at the front of the line, and awaiting a green light in order to proceed, now might suddenly have a motorcyclist directly in front of the car. This can happen with sufficient time to detect and thus prevent the self-driving car from rocketing forward once the light goes green (and avoid hitting the motorcyclist), or it can sometimes be a razor thin time margin if the motorcyclist zips up to the front just as the light is about to go green.

Rounding of Right Turns. Motorcyclists will sometimes try to go around a car that is stopped and waiting to make a right turn. The car might be waiting for pedestrians to finish crossing the crosswalk, or maybe waiting for car traffic to subside and then make the right turn. There are motorcyclists that come upon this situation and figure they will swing wide around the car and make the right turn. This is highly dangerous, and normally illegal, but anyway it does happen and enough that a self-driving car needs to be watching for it.

Stop Sign Rolling Thru. Motorcyclists will sometimes do a rolling stop at a stop sign. Rather than coming to a complete halt, the motorcyclist figures they’ll kind of cruise through the stop. A self-driving car that is expecting any vehicle to come to a full stop will often get caught off-guard and thus the chances of an entanglement with the motorcycle is heightened.

When designing this specialized AI component, the approach consists of anticipating the “crazy” maneuvers that some motorcyclists make. I realize this might seem like I am suggesting that motorcyclists drive illegally or otherwise are a danger to the roads. I am not saying this. I am merely pointing out that a self-driving car should be ready for all contingencies, including motorcycles that drive normally and ones that don’t.

We have devised two major approaches to the AI doing something about these anticipatory practices. There are actions by the self-driving car that we consider to be passive avoidance, while other more overt actions are known as aggressive avoidance. Let’s explore these two approaches.

An aggressive action to the above-mentioned aspect of avoiding the lane splitting motorcyclist might consist of having the AI of the self-driving car opt to change lanes entirely. In other words, rather than simply nudging out of the way, the AI might decide that the motorcyclist seems bent on danger and so want to move further away from the motorcyclist. This might necessitate making a lane change, even though there might not have been any other reason to make that lane change. The aggressive avoidance move makes bolder steps to avoid an entanglement.

Detecting motorcycles is not easy. Unlike cars, a motorcycle has a much slimmer profile. It can be readily hidden from view. Once it is spotted, it can then seemingly disappear from view. All of the sensors need to be used, including sensors such as the camera, the LIDAR, and radar, the sonar, etc.

Detection and tracking is actually a hard problem. The detection and tracking can be enhanced by using the anticipatory AI elements. If the AI anticipates that a motorcycle, once spotted, but now let’s say it is on the other side of a large truck in the lane over, will likely reappear to the right of the truck. Thus, the sensor data can make more sense even when only small clues exist as to whether a motorcycle is present or not.

So far, I’ve been discussing motorcycles as though they only appear one at a time. Of course, in any driving situation, there are bound to be multiple motorcycles involved. Often, motorcyclists like to travel in packs, under the belief that it is perhaps safer and they are more readily seen by car drivers. Plus, motorcyclist often have an alliance among other motorcyclists, and will at times simply “join up” when they spot each other in a given driving situation. Therefore, the self-driving car AI needs to be tracking multiple motorcycles at once. And, there are at times group behaviors of motorcyclists that are important to be aware of.