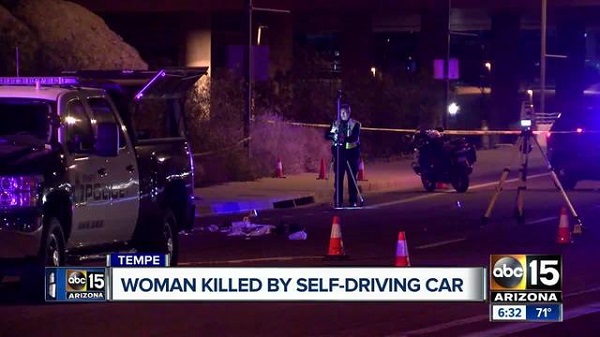 TEMPE, Ariz. — Police say early indications show an Uber self-driving SUV may not have had time to stop or avoid hitting a pedestrian who was killed Sunday night. Uber suspended all testing of its autonomous vehicles after the crash, which is the first-known pedestrian fatality involving a self-driving car.

Police say 49-year-old Elaine Herzberg was walking from a median into the lane with the self-driving Uber, reports CBS News correspondent Kris Van Cleave. While the SUV likely had no time to stop, the question is: Should the self-driving car technology have sensed the woman coming?

Police say the SUV was operating in autonomous mode with a human backup driver. The Uber was traveling northbound at just under 40 mph at around 10 p.m. when Herzberg attempted to walk her bicycle across the road from west to east. She was at least 60 yards from the crosswalk when she was struck and killed.

“Our investigation did not show at this time that there were significant signs of the vehicle slowing down,” Tempe’s Sgt. Ronald Elcock said.

Friends said Herzberg had struggled with homelessness. “She was trying to get her life back and was succeeding with it,” friend Deniel Klapthor said.

In a statement, Uber said, “Our hearts go out to the victim’s family. We’re fully cooperating with local authorities.”

Read the source article at CBSNews.com