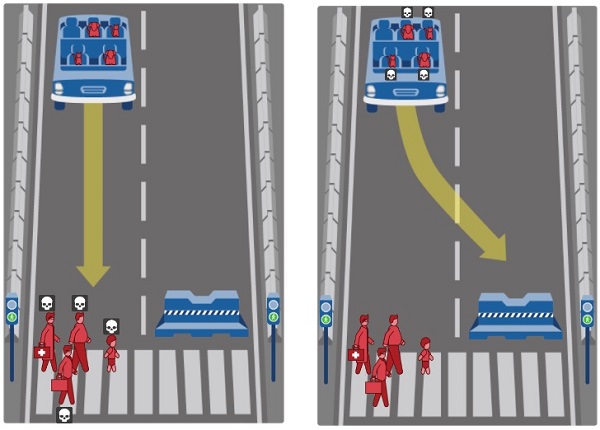 A simulation for a self-driving car has to be realistic, otherwise it will lead the AI down a primrose path. If the simulator does not abide by the law of physics, for example, and allows a self-driving car to go from 60 to 0 miles per hour in a nanosecond, this is not what happens in the real-world. As much as possible, the simulation has to be equivalent to the real-world. You can’t drive up onto the sidewalk willy-nilly to avoid hitting another car.  Well, actually, in the real-world you could possibly do so, but you’d need to be sure that going onto the sidewalk was prudent, physically viable, and the only available last-resort option.  Some aspects of the real-world are pretty obvious constraints such as not having the self-driving car sprout wings and fly out of a gnarly situation (I am hoping that does become possible at some far ahead future time!), or be able to instantaneously reverse direction or leap over a tall building.

I mention this aspect about needing to have real-world constraints in a simulation since sometimes a self-driving car simulator is based on a car driving game which doesn’t especially care about real-world aspects.  Many of the car driving games are loosely based on the real-world, but are not “burdened” by having to strictly abide by the real-world. A game that allows the car to hit other cars and bounce off them, or hit pedestrians without caring that those pedestrians are injured or killed would not be an appropriate simulator for machine learning purposes.  By extremely careful about using any game playing car simulator when training your self-driving car using machine learning.  The machine learning won’t realize that those real-world constraints aren’t real, and so the AI will ascertain that aspects such as hitting others or flying are all reasonable options to undertake.  Keep in mind that the machine learning is looking for patterns and trends, and it will find them in the must subtle of ways, thus, if the simulator doesn’t bound it with real-world constraints then it is going to potentially find those “outs” and make use of them whenever it wishes.

At our Cybernetics Self-Driving Car lab, we are using simulators extensively and have some handy tips and insights for others that are desirous of using such simulators.

First, as mentioned, make sure the simulator is based on real-world constraints such as the physics of what happens in the real-world. Objects need to abide by the laws of motion, and need to take into account environmental conditions such as the impacts of rain, snow, and the like. A car reacts differently on a rain soaked road than it does on a dry road. Some simulators don’t consider this aspect and so when the self-driving car is trying to learn driving techniques it will falsely think it can hit the brakes and have the same stopping distance no matter what the surface of the road is like. This is not the real-world. This will cause the machine learning to be messed-up in the real-world. Imagine it trying to urgently apply the brakes when driving on an icy road and falsely learned via simulation that the car can stop in a certain distance due to simulations that pretend that all roads consist of pristine asphalt in dry and perfect conditions.

Next, the simulation should have a wide variety of typical driving situations so that the machine learning can properly generalize and find patterns.  If the simulator is solely about driving on the open highway, this won’t do much good for the machine learning since it will only know about open highway circumstances. It won’t know what to do in the inner city or suburb driving conditions. You need to make sure that the simulator covers a myriad of the typical driving situations. Not only is the overall environment crucial, it needs to include aspects such as other cars on the roadway too.

I’ve seen one simulator that only has the self-driving car on the road. There aren’t any other cars. The machine learning will opt to potentially use any lane of the road that it wishes to do so. It can change lanes without having to detect and worry about other cars in those lanes. It can go any speed it wants, since there aren’t cars ahead of it. It can brake suddenly and not worry about any cars behind it that might smash into it.  This kind of an artificial world is maybe interesting for some research purposes, but it won’t help a self-driving car that is destined to be on the real-world roads.

Besides having typical scenarios, the simulator needs to be populated by real-world entities. There need to be pedestrians, and they need to be realistic such as darting onto the road when they shouldn’t be doing so. There need to be bicyclists and they at times should veer into traffic or make illegal moves. There need to be motorcyclists that drive right next to your car and weave in and out of traffic.  As much as possible, the simulator needs to have the same entities as the real-world. Plus, those entities cannot be programmed to be perfect and generous toward the self-driving car. Instead, they need to be programmed to be selfish, inattentive, and have a willingness to do what is wrong as much as they might have a willingness to do what is right.

As an analogy, suppose you were trying to figure out how to use your eyes, your nose, your ears, in order to understand the world around you.  Your brain is cognitively trying to comprehend the world, and takes as input the sensory info coming from your eyes, your nose, your ears.  If I were to say that I can just plug directly into your brain, and bypass your eyes, nose, and ears, would your mind be learning in the same manner as if it were using your actual senses? Though this might seem like a philosophical debate, it is actually more pronounced as there is definitely a mind-body connection that shapes how we learn and what we learn. A machine learning approach that “learns” without making use of the sensory data that it will be getting in the real-world is gaining a false and misleading perception of the real-world. It will struggle mightily once connected to real-world sensors that are detecting real-world objects and actions.

If you are interested in trying out some of the simulators that exist for training of self-driving cars, here are some notable ones that you might want to use:

Udacity is making available their self-driving car simulator via open source. It was constructed using the free game making tool Unity. You can use the existing tracks and also add new tracks. Go to the Udacity web site or to GitHub and you’ll find the simulator available there.

DeepTraffic was made at MIT and provides an ability to simulate highway traffic. It is a means to get your feet wet in terms of neural networks and traffic conditions.

Grand Theft Auto (GTA) has been enhanced via OpenAI and the DeepDive Project. Using the Python Universe, the enhanced GTA V provides a 3D world for the exploration of live action and the behavior of people.

Please make sure to keep in mind my aforementioned caveats when using any of these self-driving car simulators. Watch out for non-real-world aspects. Watch out for hidden assumptions embedded deep within the simulator. Watch out for narrow scenarios rather than having a wide diversity of scenarios. Watch out for lack of behavioral aspects and the assumption that other drivers and other people will all be accommodating and polite. Etc.

Are Airplane Autopilot Systems the Same as Self-Driving Car AI?

Getting Rid Of Revered Level 5 Of Autonomous Cars Is Being Chewed...