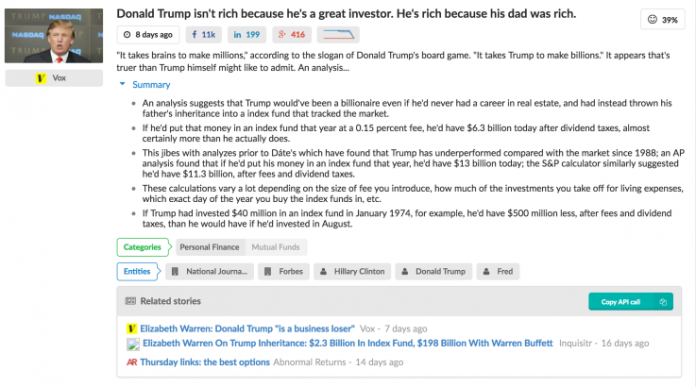 “The idea for the News API is to give access to the news content that is out there enriched and in real-time to developers and data scientists,” says co-founder Parsa Ghaffari. “It’s a very data and analytics centric approach to news.”

The Dublin-based startup says it’s utilizing core text analysis tech powering its existing text API product, which launched back in February 2014 — but this time it’s focusing exclusively on news content and also doing a little more of the analytical heavy lifting for its customers.

“We decided to simplify the use case a little bit by collecting and analyzing the news documents on our end, rather than giving them the tools to do that themselves. So this was born out of that,” says Ghaffari.

He adds that the text analysis API was already being used by news and media companies “to makes sense of news articles at scale” — so the team has now stepped in with a tailored product to better serve that demand.

A.I. Startups: Where are the Opportunities?