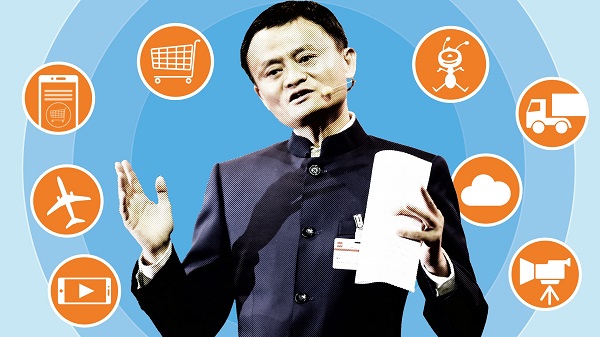 The competition between the US and China around AI is playing out on multiple fronts that include the cloud. Leading cloud providers in China – Alibaba, Tencent and Baidu – are ready to compete with US giants Amazon, Google and Microsoft to deliver AI services online.

Amazon and Alibaba representatives recently faced off directly at EmTech China, an event held by MIT Technology Review in Beijing recently. Jian Wang, president of Alibaba’s technology committee and a senior figure at the company, spoke of the business potential cloud AI. “I’m convinced that AI or machine learning will be the major consumer of applications [in the cloud]” Wang said through a translator, quoted in MIT Technology Review. “It will offer many scenarios.”

The largest cloud provider in the US, Amazon Web Services, today offers a number of AI services via the cloud. Animashree Anandkumar, principal scientist at AWS, said at the event, “Currently, running experiments on AI requires huge computer resources. The cloud is a way to democratize AI because anyone can access that compute power.” She suggested Amazon has global ambitions for its AI services. “The other aspect of democratizing AI is globalizing it,” she said. “How do we enable everybody to innovate locally, and have equally good support across languages and cultures?”

The Chinese government in July 2017 announced a plan to build AI capabilities and lead the world in AI by 2030. “They are in it for the long run,” stated Chirag Dekate a high performance computing analyst at Gartner, quoted in Investor’s Business Daily. “The U.S. is driving AI innovation across the spectrum, in software and hardware. Early use cases early adopters – are happening more in the US than any geography in the world. But China is looking at it from a marathon perspective.”

This context gives Alibaba nationalistic as well as business reasons to grow. However, while speaking at the World Economic Forum in Davos, Switzerland, in January 2018. Alibaba founder and Executive Chairman Jack Ma sounded a cautionary note about AI.”The AI and robots are going to kill a lot of jobs, because in the future, these will be done by machine,” he said during a panel discussion reported by The News Minute.. “I think AI should support human beings. Technology should always do something that enables people, not disables people.”

Ma suggested the giant technology companies need to recognize their social responsibility. “We have the responsibility to have a good heart, and do something good. Make sure that everything you do is for the future,” said Ma, founder of what is now the sixth largest Internet company worldwide by revenue. “People like us have the money and resources and we should spend money on technology that enables people, empowers people and makes life better.”.

Jack Ma was introduced to the Internet on a visit to the US in 1995. Computers at the time were rare in China; the Internet and email in China was non-existent. According to an account in Shout Me Loud, Ma searched on the Mosaic browser for “beer” and out came results from different countries, but none from China. He searched on “China” and got no results. He decided it was time for China and its people to get on the Internet.

He persuaded 17 friends to join him and Alibaba was launched in 1999, starting in a small apartment in Hangzhou, China. Today Alibaba competes with Google, Amazon, PayPal and eBay. It has established a strong presence in virtually every sector. In India for example, from a recent account published in YourStory, Alibaba has invested nearly $1.7 billion in startups since entering the market in 2014. These include Bibbasket, Zomato, Paytm and XpressBees.

Ma secured $5 million in financing from a consortium of investors and used it to launch Alibaba.com, a B2B platform and 1688.com, a B2C platform. The timing was good; China was just getting started on the Internet boom and India has hardly even begun exploring it. Ma then raise $20 million from investor led by SoftBank, which supercharged the company’s growth. The instant messaging tool Aliwangwang and third-party online payment platform Alipay were subsequently launched. Now Alibaba Group had the “iron triangle” of e-commerce, logistics and finance businesses on which the company is built today.

The growth of Alibaba, along with Baidu and Tencent, was greatly assisted inside China by the Chinese government’s efforts to control Internet policy. The government set up the Great Firewall, an Internet filtering and censorship engine, which made it extremely difficult for the Chinese operations of Google, Yahoo! and eBay. This allowed Alibaba and its fellow Chinese entrepreneurs to build an iron grip on the fast-growing Chinese Internet-using population.

From 2013 on, Alibaba has been a prolific investor in companies from Asia to America and everywhere in between. In September 2014, the company – not well known outside China at that point – made global headlines with a $25 billion IPO in the US, establishing a market value of $231 billion. It was the biggest IPO in US history, and made Alibaba the 23rd most valuable company in the S&P Index, ahead of Amazon at $150 billion and eBay at $65 billion. Having spent $2.7 billion in investments to that point, Alibaba then went on a $12.9 billion spending spree

This included investments in SoftBank Robotics, the Didi Chuxing ride-sharing firm and Lyft. In 2016, Alibaba’s revenues surpassed those of Walmart, Amazon and eBay. It also outperformed Amazon, Google and Microsoft in public cloud revenue. Alibaba invested another $10 billion in 2016 and $11 billion in 2017 to expand further.

Alibaba Now at the Forefront of AI Research

With its Aliresearch R&D division, Alibaba is now at the forefront of AI research, using machine learning to drive sales, marketing and customer service during its annual Global Shopping Festival. Its Single Day sale last Nov. 11 tallied $25.3 billion in sales, four times the combined sales of Black Friday and Cyber Monday in the US. The practice started in the 1990s when Chinese university students began celebrating being single and splurging on themselves.

Alibaba’s shopping portal was assisted by Tmall Smart Selection, an AI-powered recommendation algorithm that helped buyers make decisions, according to an account in the South China Morning Post. [Editor’s Note: Alibaba owns the South China Morning Post.] “We are confident AI would prove more efficient in helping retailers boost sales,” said Cai Xiaowu, the Alibaba Group engineer responsible for the development of Smart Selection. He said big data and AI excels in picking products such as clothes, by helping the shopper navigate through numerous brands and variables.

Once the products are ordered, Alibaba has robots helping to deliver them, a la Amazon. About 200 automated guided vehicles work around the clock at a newly-opened automated warehouse operated by Cainiao Network, Alibaba’s delivery arm, in Huizhou, a city near Shenzhen in China’s south.

“These 200 robots can process one million shipments per day,” said Li Yakun, a worker at the automated warehouse. “They are three times more efficient than manual operations and need to be charged for just one hour after every six hours of use.” The efficient operation allows consumers in Hong Kong and Shenzhen to receive same-day deliveries – orders placed in the morning are delivered to the customer’s doorstep in the afternoon.

Cainiao also has such warehouses in Tianjin, and Wuzi in Jiangsu province, and in Malaysia. If the company has trouble finding people to work in the warehouses, they deploy more robots to cover the labor shortage.

Alibaba in March used drones to deliver packages over open water for the first time. The flying robots delivered six boxes of passion fruit weighing a combined 12 kilograms from Putian in Fujian province to nearby Meizhou Island, a distance of 5.5 kilometers. Alibaba said it is considering using the drones in the future to deliver high-value products such as medical supplies and fresh food.

Jack Ma said at the Alibaba Computing Conference in Hangzhou recently that the company’s strength in technology is a differentiator. “People tend to recognize our platforms and services, but overlook the technologies that make it happen,” Ma was quoted as saying.

Alibaba also collaborated with Starbucks in Shanghai to set up an augmented reality experience in the coffee chain’s largest store in the world.