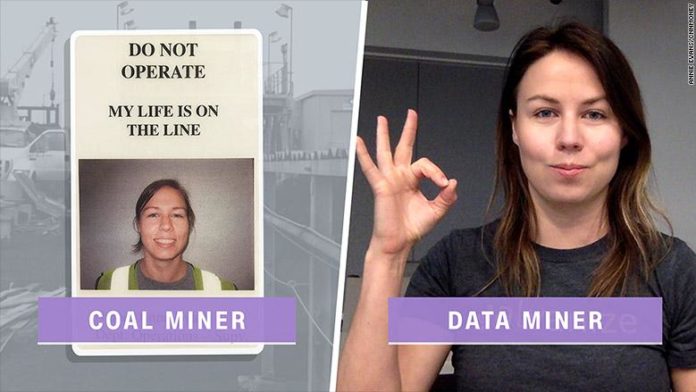 In her old life, it was not unusual for Annie Evans to find herself standing in the pouring rain outside of a coal mine at three in the morning, staring down a broken piece of equipment.

A heavy maintenance superintendent for a surface coal mine in Elgin, Texas, Evans was responsible for figuring out how to patch or replace outdated parts of a field delivery system that ferried coal from the mine to a plant. Each minute of downtime could cost the company as much as $170.

Now the third-generation coal miner gets her adrenaline rush sitting indoors on a soft swivel chair, fixing code on a computer screen. The 33-year-old is a data scientist currently doing a paid residency at Galvanize in Austin.

“I was an adrenaline junkie,” sad Evans of her past career. “This is such a completely different world.”

Coal mining jobs were thrust into the spotlight during the recent presidential election. In 2015, there were fewer than 100,000 coal mining jobs in the U.S., a 59% drop from 1980, according to the Brookings Institute. President Trump has said he will work to bring coal jobs back by removing regulations, but experts say that low natural gas prices, green energy and automation actually pose a greater — and irreversible — threat to the industry.

“The EPA was coming down our back, our company was going into bankruptcy, we weren’t making money because the price of natural gas is so low,” said Evans.

Her grandfather worked as an above-ground coal miner for more than 40 years, traveling to Wyoming, New Mexico and Australia. Her father used to work underground, but now he travels to mines around the world as a Vice President of Minerals Technical Services. Her cousin also worked in coal mining, but he left to get a PhD in rocket science and is interested in mining in space.

Coal mining is in her blood, but Evans discovered a hidden talent for programming.

“While I was working as a coal miner, I taught myself to code on the side as a guilty pleasure,” said Evans.

Big Data Jobs Pose a Grim Reality When You Work in...